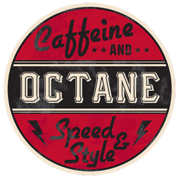 Good Afternoon - I am the producer of the monthly Caffeine & Octane Car Show based in Atlanta GA. Over the past 11 years, our show has grown from 20 cars to a gathering of 3,000 cars and 15,000+ enthusiasts. In 2015, I had the opportunity to pitch the Velocity Channel on a Caffeine & Octane TV Show. No fake drama, just real stories about authentic enthusiasts who love cars. Season One launched last February and it became a hit series. So much so that Velocity has re-aired the episodes 80 times since the premiere. I was approached by NBC to move the show’s second season to the NBC Sports Network. The result was a three season prime-time deal that Velocity was unable to match. So,this Thursday night at 8:00pm EST, we will premiere the second season of The Caffeine & Octane TV Series on the NBC Sports Network.
Here is a link to a video that will give you a good feel for the show. https://youtu.be/NO0NzythHsk

I would not be writing to you if I did not think you and your friends were going to really enjoy the show. The cars are awesome, the hosts are true auto enthusiasts, and the stories of the owners’ passion never get old. The show is produced by true car enthusiasts. I hope you’re able to check it out this Thursday at 8:00PM and 8:30PM EST and share it with anyone you think might enjoy it too. It was word of mouth that built our following on Velocity and I am hoping, with your help, we can attract an even bigger audience on NBCSN with these seven new episodes.

Lastly, as C&O looks forward to Season Three, we are planning to feature car meet-ups from all around the USA. We are always looking for great stories so if you know of one, I hope you will write me back with some details. After you watch the show, I think you will have a good idea of the types of stories we look for when filming.

Thanks so much, Bruce Piefke
CEO, High Octane Events, LLC

RSVP for Back With A Marathon! - Caffeine & Octane TV Show - NBC Sports Channel to add comments!