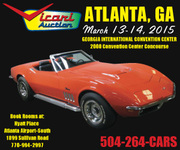 Bidder's will have the opportunity to buy some great classics in Atlanta this March including a survivor 1966 Chevrolet Bel Air two door sedan, with a matching numbers 427/425 HP engine and close ratio four speed transmission.  This highly coveted Bel Air came optioned with a 4:10 rear end factory built sleeper, and the L72 package which was popular among drag racers.  This Bel Air is believed to have just 60,321 miles, and comes with documentation dating back into the 1970's.   The Bel Air has spent 27 years in a private collection and will cross the auction block at the Vicari Auction in Atlanta on Saturday March 14th, 2015.

Other headliners include a 1962 resto-mod Corvette and 1970 Plymouth Superbird.  The '62 Corvette was recently built with a Street Shop Chassis and a 525 HP LS3 V8 complete with fuel injection.   A five speed Tremec transmission and Viper 355 gears put the torque to the street.  The C6 coil-overs and Rack-And-Pinion steering ensure that this classic sports car has a modern performance ride.  Atlanta bidding is expected to be feverish when the 440 Six Pack Superbird takes the block.  This low production Plymouth comes with a four speed transmission with pistol grip shifter, power steering, power brakes, and black vinyl interior.  "The muscle car market saw a sharp decline in Plymouth values in 2008," said Pete Vicari owner of Vicari Auction, "but 2014 was a great year for the Superbird, at auctions, with healthy Hemi Bird sales exceeding $400,000 and even some rare Birds reporting sales nearing seven figures.  We expect this 440 Six Pack Superbird will really impress bidders."

The Vicari Auction opens its doors in Atlanta Friday & Saturday at 8:30 AM.  Pre-registration is highly recommended for bidders and consignors, although you may register at the site upon arrival.  On site financing is available from Keesler Federal Credit Union.   Admission is $10.00 and children under ten are free with a paid adult.  Area hotels and more information is available at www.vicariauction.com