“Hot Rodders of Tomorrow” is a nationwide high school engine building competition. It is amazing how including a little competition, stop watches, trophies, and scholarship money can change things!  Sponsored by various related and supportive businesses like Edelbrock and Winner’s Circle Speed Shops, teams of five students go against each other, with trained judges monitoring the process, in the dismantling and reassembly of a functional, fully equipped V-8 engine!

The spectator draw for the competition is compelling and exciting; watching these young people ply there skills. One Georgia State Department of Education official who witnessed the Atlanta event said that next year they should have bleachers to better seat the growing audience!

Watch the some of the competitions here: Youtube/Hot Rodders of Tomorrow On Wednesday February 20th, 2013, the Hot Rodders of Tomorrow (HROT) held a demonstration in Atlanta at the Georgia State Capital second floor Atrium.  The 2012 HROT National First Place winning team from Peach County High School, seen here with their instructor, John Rickerson, performed demonstrations for State Senators, House of Representatives and various tour groups which happened to be at the Capital at 9:00am--12:00pm--2:00pm. 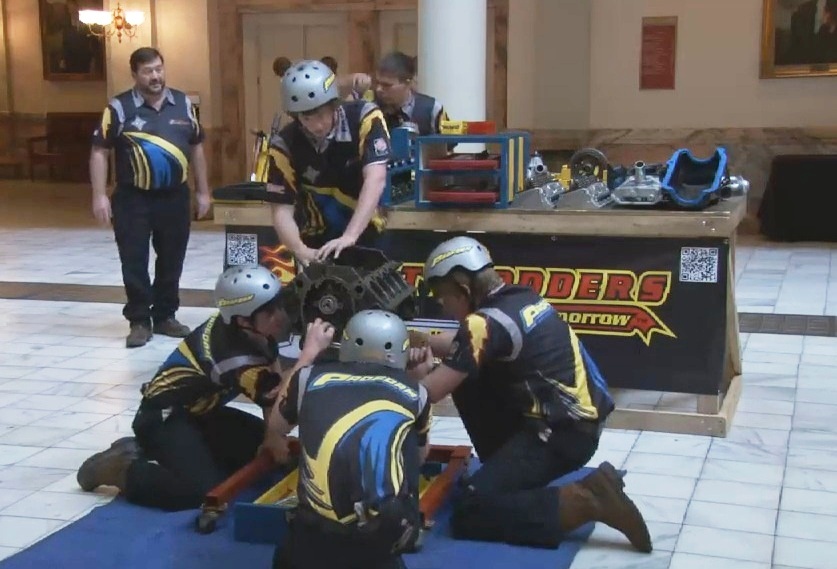 They disassembled and reassembled a 350 Chevy engine just like in the Hot Rodders of Tomorrow competition which will be held again this year at the Georgia International Congress Center near the airport on Camp Creek Pkwy on March 21st and 22nd, 2013 together with the Skills USA state competition hosted by TEFGA (Transportation Education Foundation of Georgia) and the Georgia Department of Education.  This event will once again draw about 7,000 students, educators, politicians and many more; all involved in careers for students that are rewarding and don't necessarily require a college degree.

The demonstrations were filmed by the US Education TV during the day and will have a video on their web site at http://www.useducationtv.com/.  They will also distribute a video CD of the State Capital demonstrations to High Schools in the state to inform educators and students of what's going on in vocational education.

Skip Petsch and Ken Whitaker from the Georgia Street Rod Association, a statewide group supportive of the Hot Rodders, helped narrate the 12:00pm demo along with a host from US Education TV.  They described the tear down, reassembly, torqueing and adjustments which had to be made in the competition while the filming was in progress.  A number of members of the Georgia Street Rod Association were present to answer questions from the various tour groups which were at the capital, the numerous state administrators, and elected officials while the Peach County High School team performed their magic.

Hot Rodders of Tomorrow is a nationwide High School automotive engine building competition which has experienced tremendous growth and support since its inception five year sago.  The Specialty Equipment Market Association (SEMA) which represents the specialty automotive industry of more than 6,500 member-companies is just one of their key sponsors.

All monies collected go towards the automotive students purchasing a used vehicle, repairing it and donating the vehicle to The Peace Place, it is the local women's battered shelter.

Cruise In Car Show as part of the 2nd Annual BBQ, Boots and Blues at Lake Lanier Islands Resorts! noon to 6 pm ! Free admission and free parking with classic or hot rod car.

Tom Begler (left) has volunteered since the beginning of HROT and is a true expert on the engines and the rules!  Jim Bingham, HROT founder and chief, is the CEO of Winners Circle in Joliet, Ill., and a Board Member of SEMA.

Hot Rodders of Tomorrow - Out Front at SEMA 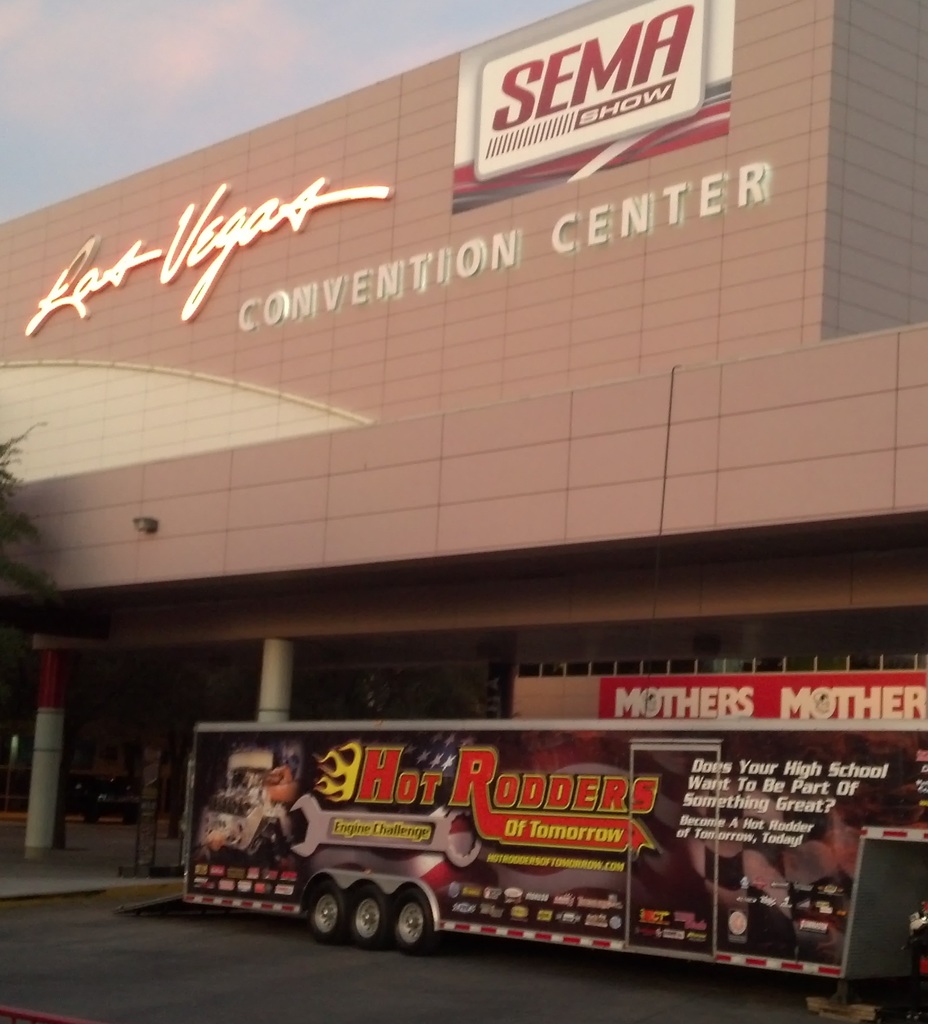 So here we are in Las Vegas, with Halloween on the horizon, at the Specialty Equipment Manufacturers Association’s (SEMA) annual convention for 2012.  The SEMA Show is the largest automotive specialty products trade event in the world. It brings together the industry’s hottest products and greatest talent to the Las Vegas Convention Center.  This year The Hot Rodders of Tomorrow are set up at the entrance of the SEMA show! 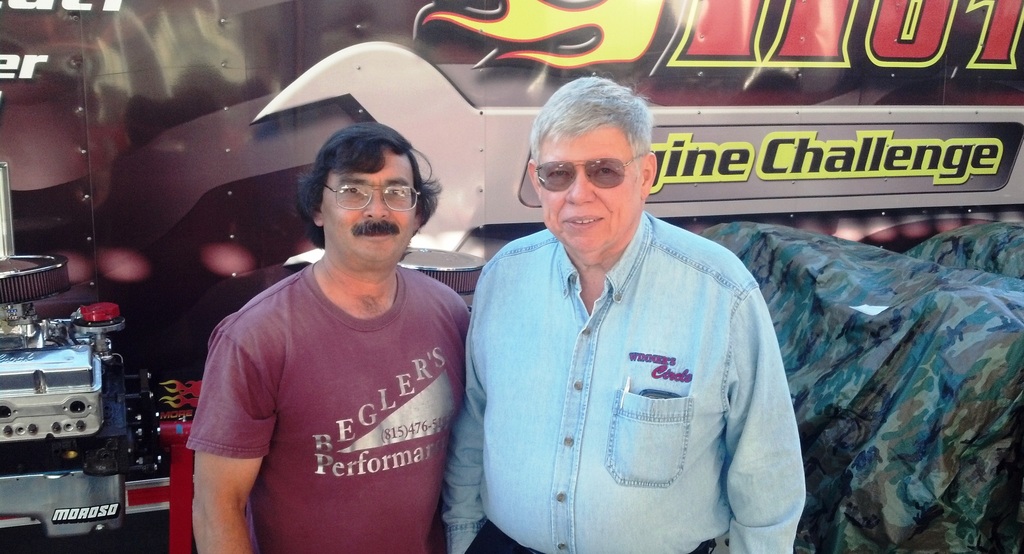 This is a wonderful opportunity for participants to witness the results of years of practice by high school students under the coaching of their automotive class instructors. Twelve teams are coming in from all over the country for a four day elimination event, the most ever done at SEMA before.  While the SEMA Show is known for its wonderful educational seminars and product demonstrations, the Hot Rodders of Tomorrow is a special event right at the front door!

Last year SEMA 2011 drew more than 60,000 so it is expected that at least that many persons may pass by the Challenge.  It has been touted as one of the most entertaining attractions each and every year at the SEMA Show. It is run by volunteers and sponsored by many of the major players in the performance industry. The kids, in teams of five, compete with each other for bragging rights and college scholarships in what is one big engine building race.  They square off in several “heats” in which a Chevy 350 high performance engine is torn down and rebuilt throughout the week of SEMA to determine an overall champion in front of tens of thousands of spectators!

Only in America! For more details on The Hot Rodders of Tomorrow go, to their website http://www.HotRoddersOfTomorrow.com.  If you are anywhere near Vegas, be sure to stop by and meet with volunteers and see the teams compete.