This past I attended the most unusual and by far the most successful 1 day automotive event in the South. Import Alliance at the Georgia World Congress Center parking garage in down town Atlanta. The seven floor parking structures opened its doors at 8 am Sunday the 17th to to what begins as a trickle of car enthusiast and by 9 am is a torrent. By 11:30 am almost all 5,000 spaces in the parking tower were filled. 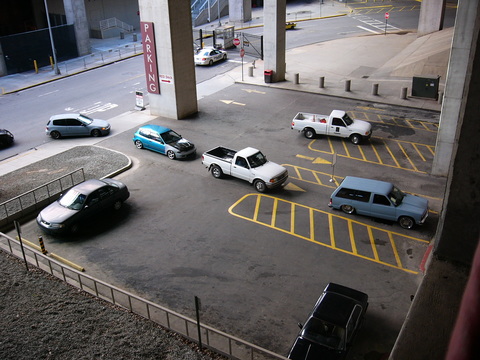 by 12 noon a full cruise was in motion with cars constantly rotating through the structure. In the picture you see the lower, main entrance. The upper entrance was also feeding cars in. The management opened the outside lots and eventually those got filled too, another 2 to 3 thousand cars. This is the third time that import Alliance comes to Atlanta, and this was by far the largest event of its kind.

Who is Import Alliance? A group of very smart men. They used to sell parts at car shows and a few years ago sales dropped off and going to car shows was no longer paying. So they decided to promote an event themselves and as they say the rest is history. The interesting thing is that they do not advertise in conventional ways, no ads, no flyers, no calendar postings. See the video.Their original web site was out of date last year, so how do they get the word out? Electronic bulletin boards...er what? Bulletin discussion boards! I became aware of "the boards" almost two years ago when I was trying to find out how the "Tuners" were communicating among themselves. I am not writing an article about communications here but I have delved into this above ground underground. It is fluid, sites come and go and it works. So basically when they have a time and place where they will be holding an Event, they post it on the Boards, from there it gets passed on, time and time again and soon thousands of people know. Except on the outside, the "main stream" that has no idea what is happening. And so it goes on where in a major Metropolitan city like Atlanta this huge event happens and no one outside of the loop, TV stations, local news papers and radio shows have the slightest clue that one of the areas biggest automotive events is happening right in front of them.