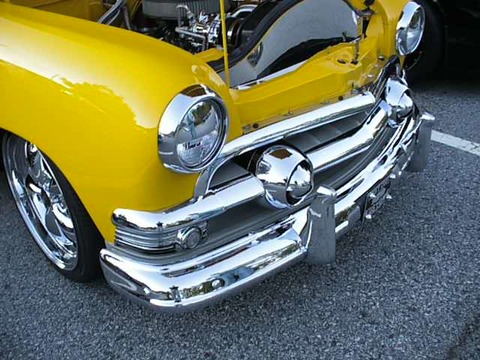 In early in 1951 my father bought a 51 Ford Convertible. His plan was to exploit a hole in the Over The Road Racing Rules that did not forbid engine swaps. Dad somehow acquired a brand new 1951 Cadillac Overhead Valve V8 of 330 cubic inches, the "Hemi" of its time. He apparently had the engine before the car and his shop balance and blueprint the engine. In the process he discovered a Californian named ED Iskenderian who was working some magics with cams to find more power. The 51 went directly from the port of Havana to the shop where the 85 horsepower flathead was replaced by the 300 horsepower Cadillac V8. The Fordyllac was born. Speaking of being born, in November of 51 that was the car that took me and my mom, in a hurry, to the hospital when it was time for me to join this world. Mother was not much of one for speed, as a matter of fact she was terrified riding in a car. The ride to the hospital is a story I heard 10,000 times if I heard it once.

The Fordyllac became a legend! Due to the long time it takes rules to be changed, Dad figured there was nothing that could catch it for the first year. The light weight of the Ford combined with the Cady Muscle also caused a few expected and unexpected issues. The Ford overdrive 3 speed was not quite up to the torque of the big V8. The Crafty Cuban mechanics at the shop somehow created a LaSalle 3 speed overdrive transmission and history has lost what overdrive unit they used. Next thing to get attention was the differential that was twisting axles and shredding gears, a Cady diff was made the appropriate size to fit in the Ford. Brakes were also an issue and the correction for this was to fit the brakes from a Lincoln limo. All these niggling breakdowns were keeping the Fordyllac out of the Victory Circle. For 1952 the rules were re-interpreted to eliminate convertibles from competition. Much to the competitors chagrin the first race in 1952 the 51 Fordyllac made its appearance with a coupe hard top properly welded in place. The Fordyllac went on to a few wins but at this point the factory teams were getting up to speed and getting very hard to beat. In 1954 the old Fordyllac was being left in the dust of the Buicks so for 55 the Ford got a new home and we acquired a new Studebaker Speedster, smaller engine trade for better aerodynamics. Stay tuned for that story. 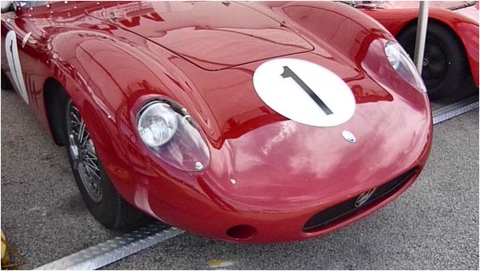 In the 50's the great Formula 1 constructors would derive their two seat Sports Cars directly from the Formula 1 cars. The 300S was based on the 250F that had a very long career from 1954 to 1960. Only 26 250F's were built, most of them were raced by privateers. The 300S began in 1955 and 28 examples were built through 1958.  It is amazing the performance extracted from these cars that had Dual Over Head Camshaft Hemi head and only 3 liters, or 183 cubic inches. Power output varied from 245 to close to 300 horsepower from the 6 cylinder engine.  I had both the good and bad fortune of having a few Maserati's over the years. Maserati marched to a different drummer and like many they had good times and really bad times. I also was exposed to their construction techniques when I owned a Stangelini Formula Junior that was basically a 3/4 scale version of the 250F and it was to date the most successful Formula Jr car of all time. The 300S sports car was not always the fastest but it proved to be reliable enough to win more than its share of races against the Mercedes 300SL and the Ferrari 250 V12 Monza. It was a glorious time when the drivers were fat and the tires were skinny, and there was a direct connection from the factory race cars to the ones that were driven on the street. The 300s also begat a 350S with a monstrous V12 engine and my favorite of all the 450S with a 4.5 liter V8 that had a sound that is unforgettable. 1970 the Oldsmobile 442 and its other Muscle car cousins had come under fire from the insurance industry due to the popularity of the cars and in my opinion greed. The companies all banded together in the era of the 55 mile per hour national speed limit to make sure that the young and the young at heart would pay through the nose if they bought any thing that did not weigh 4,600 lbs and have 4 doors. Models like the 442, GTO, Z28, Mustang GT, Turino and Road Runner, all fell under scrutiny, if it had a V8 bigger than a 350 they would get hit with a big insurance premium. Very flawed thinking. The Ralley 350 was Oldsmobile's answer to sell a sporty car on keep it out of the high premiums. Ignoring the reality that in less than 3 hours that 350 could be lifted out and a 455 monster be dropped in and there was no way that the average insurance adjuster could tell a high output 455 from a milk jug. Those that would rather keep the engine in the car that it came with, found out that you can get loads of power from any 350. I was very guilty just like most young men that grew up in the 60's and 70's of burning up 30 cents a gallon of Sunoco 260 to blast down the street, stupid laws or insurance companies be dammed. If the insurance companies had truly cared for their customers safety, and even today, taken a pro active role in training drivers and creating a teared licensing system we would have saved many more lives than ridiculous speed limits, driving around with the shop teacher was a total waste of time. Not that I have an opinion on this.

September, October and November in the South East are the busiest time for motorcycle car shows and cruises. The heat of August gives way to more temperate climate, where you can no longer fry eggs on the pavement. This leads to a wealth of events, and it seems that lately the over abundance translates to poor attendance for some and financial disaster for others. Free market economy rules will level the playing field and those with the best organisation and planing will prevail. Although many of the promoters in the South East are already members of these pages there are even more that are not. We are trying to influence some organization where there is non now. We have created some alliances and on October 29 and 30th we will see if it makes a difference. Two events, one established and the other an ambitious attempt to draw eventually 1000 cars to a one day event. Why not register with us and get your show dates listed as soon as possible.