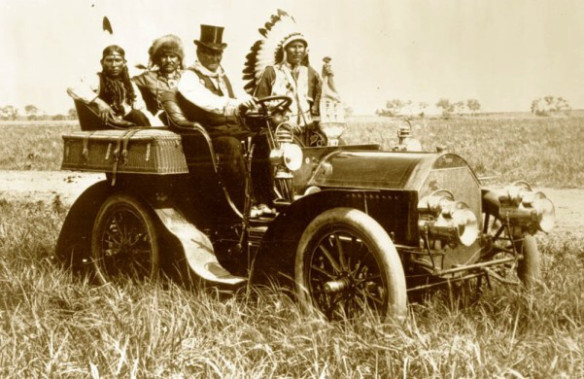 In the familiar photo above, reportedly taken on June 5, 1905, the Apache warrior and insurrectionist Geronimo sits behind the wheel of an early Cadillac touring car. He’s dressed entirely in the white man’s clothing, including an elegant top hat, and joining him in the cockpit are three more Native Americans, including the man at Geronimo’s left, Edward Le Clair Sr., wearing a Ponca chief’s ceremonial headdress.

Countless tales in American folklore have been spun from this extraordinary, almost magical photograph: short stories, songs, oil paintings. The best known is a 1972 song  by Michael Martin Murphey, “Geronimo’s Cadillac,” also covered by Hoyt Axton, Cher, and others. (Listen here.) “The two images together—Geronimo and a Cadillac—just struck me as a song title,” Murphey told a music magazine in 1987. “It was every irony I could ever think of about our culture in two words.”

Click here to read the rest of the story! www.macsmotorcitygarage.com

Thank you and credits to Mac's Motor city Garage and Thanks to MAC (The Mac at Motor City Garage is Bill McGuire, vice-president and editor-in-chief. With several successful careers in the auto industry on his CV, Mac (also known to his friends as McG) has been described by one veteran Detroit observer as “the insider of insiders.” )