While I have always celebrated cars and motorcycles of all kinds, it is natural to have favorites.  I fell in love with Porsches on the Interstate years ago when I was passed by a 356 Speedster! This was a number of years before the tragic accident that took James Dean’s life in a 550 Spider.  I had assembled my version of a Speedster by buying rusty Porsche parts at swap meets, and blending in VW, Alpha Romero and aftermarket parts.

“Little Red” (apt if not creative) helped me be known as the “Big Guy with Little Car” and we enjoyed collecting trophies around the country for being different, if not truly unique.  He is clean and runs well, but not a 911!  I looked for a number of years for the right 911 for our family.  I wanted an air-cooled era, cabriolet with a G50 transmission, preferably white.

The search had been going on for some time, but truly heated up about 4 years ago when I became a serious buyer.  As Porsche buyers learn quickly, it is hard to find the car you want, at a price you can afford.  With Porsche prices going up steadily, if you hesitate, the ceiling can go above your reach, especially for cars that have not been totally beat up!

As a family man, I do not have an unlimited budget.  Many Porsche have been raced and rallied, and pushed for performance, as they are designed to do; and want to do.  However, when they go for sale, many of the sellers will let the corresponding responsible maintenance fall to the buyer. This is very expensive.  A buyer then must have a reserve available to attend to what is very often a neglected issue pending its sale.

I looked at many cars and could not find the balance between the car I wanted, what I could afford to buy, and where I had the talent and resources to fix it for road and show.  I did come across a very good buy on a one-owner white Boxster in Buckhead that I jumped at. While it was not the 911 I sought, it was a great car, very balanced and well maintained.  It was quick and reliable and I used it as one of my main drives for several years.

Then I found her!  A friend called that he knew of a white, 1987 wide body 911 Cabriolet that was for sale in Kennesaw, GA.  While the mileage was a little high, it was well cared for and clearly had not been beaten up on the track.  With some detailing, new tires and a new top she would be show ready!  I bought her with the idea that this would be a keeper!

We named her “Babe”.  She turned out to be a very smooth, straight driver with a very agile cornering capacity that was truly endearing!  I was taking my time addressing some of the cosmetic fine tuning and very much enjoying finally having MY 911!

The drama began when we had family visiting for the 2014 Christmas Holidays and I was taking my brother-in-law, Brian, out to see the amazing car collection at Streetside Classics in Lithia Springs, GA. It was the day after Christmas, sunny and warming up nicely! I was looking forward to browsing with a friend among their 350 consigned classics and fine collectible cars.

We were waiting on a red light to turn right on GA Rt. 316 in Gwinnett County when a tractor trailer misjudged the light and ran over the rear right quarter panel! It felt like and earth quake and tore up Babe in the most awful way.  We were blessed that with the slow speed and the driver’s good reaction time, so no one was hurt.  Babe never even got into gear.  We had her towed to the crash lot (with the help of Triple-A) and I started looking into how to get her fixed. The first chapter of the “Fix Her” journey had to do with juggling and talking to insurance companies (ours and theirs), and finding out who could actually bring her back to show car ready!  The insurance part of the story was made somewhat easier by the truck driver, who felt horrible about hitting us, accepting responsibility and it was largely a job of finding how much would be needed to get her repaired.

The worry for a collectible car in this situation is often the costs of repair can exceed the market value of the car.  I talked to a friend who works at Porsche down in Atlanta and he was emphatic that the only shop that Porsche likes in Georgia is Magnum Collision and Repair in Marietta. Also, I found out later that they are the only Ferrari approved shop in the South East! I had Triple-A take Babe to Magnum Collision in Marietta, GA!

That is when we met our hero! The Captain to the Team at Magnum turned out to be Mike McConville!  I am convinced that without Mike, Babe would be in a parts yard by now.  Mike started his career right out of high school, leasing space and “giving it a go” with his father’s encouragement and help. As early as 1980 he had set his Mission Statement as “Perfection Is Achievable” and never wavered.  From his rented spot, he has grown his business into a multi-building, highly skilled specialized repair and “rescue” operation!  He has earned top recognition with his team and their work on Exotics, European, Asian, and Domestics providing the highest quality repairs possible!  The awards and honors cover their spacious offices and pristine shops.

When Mike and I met to first look at Babe, sitting in his lot, the connection was immediate. What impressed me right off was his eagerness to save my car, my Babe.  He recognized the rarity and while he is obviously a high successful businessman, he is a “car guy” and he saw the value beyond the dollar signs (unlike the first go around with the trucker’s insurance company).

He took the lead, even though he has great staff to delegate to; and again this turned out to be the best decision. Right off we could not locate any replacement body panels for this 30 year old car.  Mike looked all over both continents with no luck.  He then decided to reconstruct the body damage by hand. He had recently hired a young man who was trained by an exotic car manufacturer in aluminum braising.  With Mike’s guidance, he worked on the existing metal, hand hammering it into place. Then they “welded” hand cut pieces of aluminum into the damaged spaces and tap hammered the whole fender into the proper form!  This was a demanding and tedious process that no other shop would be willing to do, or even able to do! 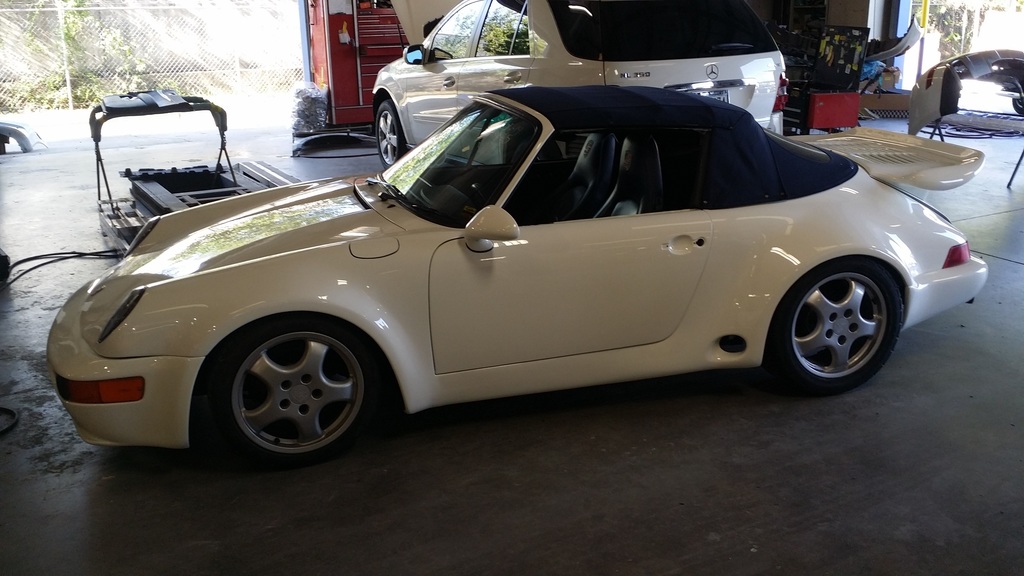 I still have some work left to do to get Babe totally finished, like a new top, some minor interior work, and getting the wheels redone. But she has already been “Yard Art” for a conference at Chateau Elan, and featured in a fashion shoot in Buckhead. Without Mike McConville and Magnum Collision, this rare little vehicle would have been parted out in some junk yard.  He is the true hero in this story. 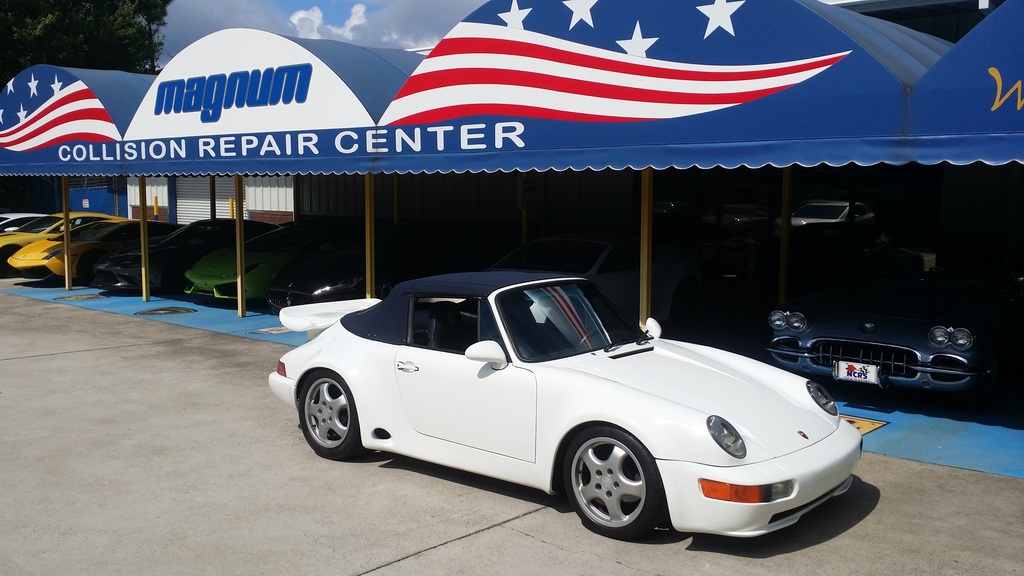 Comment by Pualani and Philip Carroll on October 21, 2015 at 2:03pm
Nice story with a nice end. Thanks for sharing Mike

Excellent story. I could feel the heartache at the hit, and what a way to unwind Christmas happiness. So glad you found Mike and his talented guy on the bodywork.

Wow!  I am really impressed with their skill of rebuilding the fender.  Amazing job.  Thanks for the story of Babe.

Glad to see she is back on the road