The place is a must if you are a tourist, to us locals it is a place to unwind at the end of the day, watch the sun set over the Golden Gate and share war stories with fellow riders.

The daily crowd begins gathering at about 3:30 in the afternoon during the work week reaching peak at about 6:00 PM. 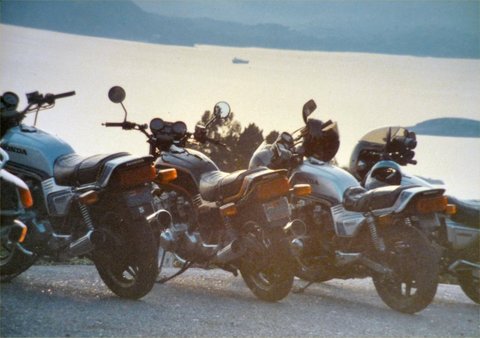 All level of riders come here, from novice to pro canyon racer looking to make a few bucks off the Squids *. All socioeconomic levels were present; from to students to CEO’s.

Robb was one of the regulars, a lab researcher by day a weekend AMA racer and one of those who won more of the canyon races than he lost.

He had kept us updated on his full race Yamaha RD 350 track bike project. He said one day he would ride it out to the wall. We all warned him of the unlikely success of pulling that off, as a full race two stroke RD 350 with race chambers is one of the loudest things on the planet. Ok, this is a good point to bring in our other main character to the story.

Grizzly Peak is part of the East Bay Regional Parks System, it has its own police force and park rangers. Officer Ripley was often assigned to Grizzly Peak, we all knew him by name as he would make a habit of stopping by the wall to randomly check for license, registration and insurance of those he suspected as racers. He was spit shine kind of a person, most likely a former Marine his boots had a blinding shine, his shirt and riding pants had the most impossible creases you could imagine. His police issue Kawasaki was impeccable, but it was his bow tie that set him apart from all the other officers, he wore his mounted outfit even when he drove a patrol car!

One day I got the idea that we should pay tribute to Officer Ripley for his devoted service. I bought 30 bow ties and 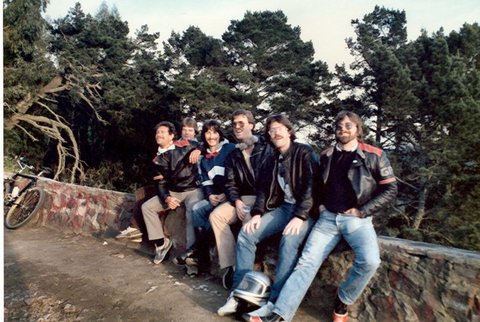 passed them out to everyone sitting on the wall that day. There we were, all in bow ties when Officer Ripley cruised by in his patrol car, a Mustang Pursuit Special. When it registered with him what he was seeing, he slammed on the brakes, looked up and down the line and smiled as he pulled away. That may have been the only time he found humor while at work.

September and October are the warm months on the Bay. That means the temperature may get up to the low 90’s. It was Friday late September. The weather had been a very pleasant 78 that day. The usual 3:00 PM breeze that brings in the fog was very light and only a slight haze was blanketing the Bay. By 6:30 PM there was a large crowd of about 50 milling around the wall waiting what for what would be a spectacular sun set. A couple with his and hers Honda Cruisers introduced themselves, this was their first ride on their new bikes and they had just completed the Safety Foundation Course and were out get more riding experience. They asked for suggestions on where to ride and we directed them south on Grizzly Peak Boulevard and told them to keep straight at the stop sign of the intersection with Fish Ranch Road and Claremont Avenue, they would have a wonderful ride along the ridge.

The sun was getting close to the horizon and it was looking fine with just a hint of haze playing with colors. It was then that we heard the shriek of a very loud 2 stroke engine beginning the climb up the 1600 feet from Claremont Avenue in Berkeley. The rider was taking it to the red line in every gear then braking hard for the turns as he down shifted and darted through to the next straight and began accelerating anew. Although we could not see it, most of us know the road well enough that we could follow the progress just by sound. The last straightaway marks the end of the residential area and the beginning of the park, from there up it would be switch backs all the way to the stop sign at the intersection of Grizzly Peak Boulevard and Fish Ranch Road. It was but a moment after the bike crossed into the park that the sound of car tires screeching for traction and the wail of a siren joined the cacophony of the bike. At this point we could actually see the road below in places long enough to see the flash of a red race bike and the black and white Mustang Pursuit Special. The chase was on.

With the sun setting, there was still a faint light, from this point on we kept up with the progress by the sound and peeks through the trees of the Mustangs headlights and flashing lights. The bike had no lights.

A point of clarification: Many believe that a fast well ridden bike will leave a car rather easily. That is true if the terrain favors the bikes superior acceleration. This particular climb had no straight parts just a steady climb from one turn to the next. The contact patch of the Mustang 4 sticky tires combined with its Pursuit engine gave the edge to the very well driven car on this stretch.

We could tell the Mustang was catching the bike. Soon they would be reaching the 3 way stop and the rider would have to decide in what direction to go. Reports from witnesses at the stop sign stated there were 6 cars waiting to go through the intersection and they all stopped when they heard the siren. The bike was only a car length ahead of the police car. Thanks to the bikes agility, navigating the traffic at the intersection gave the rider a reprieve as he turned left onto Grizzly Peak Boulevard. The chase was heading towards us at the summit. At this point we were completely unable to see what was going on and had to rely completely on the sound bouncing off the canyon walls. From the confusion of traffic at the stop sign the bike was able to use the short straight to add some room between him and the Mustang. At the end of this short straight begins a set of switch backs with the mountain on the right and a 500 foot drop on the left, an error in either direction is fatal. The Mustang started to nibble away again at the bikes lead as they continued the climb. At the end of this section is a ¼ mile straight that allows for a lot of speed. Then it’s hard on the brakes to slow it down to about 100 MPH to make the kink at Lomas Cantadas intersection and pray no one is pulling out. With a couple of stabs of the brakes to bring the speed down some more, two kinks to the left and one to the right and hope no one is pulling out of South Park Drive. 2000 feet to accelerate to the summit, then three high speed kinks in the road , brake real hard for the downhill right, the next turn is where we are standing, a big horseshoe turn and the beginning of the decent towards the residential areas of Berkeley. It was fully dusk now and we could hear the bike going through the gears heading towards top speed. Not far behind, the roar of the Mustang engine could also be heard as it accelerated down the straight.

We all turned to face south to see the scene that was about to unfold before us. What we saw made us all gasp in horror. The couple 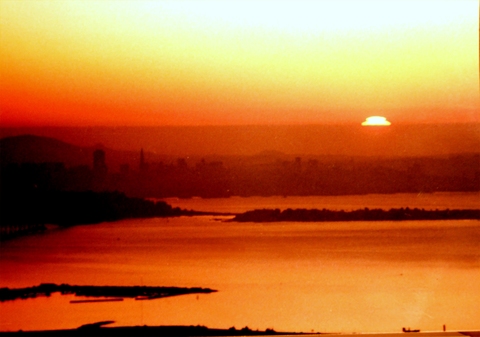 on the Honda Cruisers crested first into the turn moving at the very leisurely pace of maybe 15 mph. She was leading the way as they made the right turn and keeping close to the mountain side of the lane. He was 15 feet or so behind in the middle of the lane. Here comes the race bike braking fast and tucked in to the late apex, went past the man on the inside, drifting just lightly to the cliff side dragging pegs and his knee, he passes her on the outside at about 60 mph. She immediately stops, in shock, her husband pulls up stopping next to her. Meanwhile…. The Mustang is in a slide braking from top speed and trying to keep control to make the turn. Somehow he pulls it off and with a very late apex sweeps past the parked couple with inches to spare. The two novices got off their bikes right there and clung to each other and the hillside.

The new riders were shaken by what just happened. We helped them cross the road and brought their bikes to the parking area. While we were helping them get back to normal the chase continued. The downhill side, now giving the advantage to the bike, the gap began to widen. Brakes on a 3000 pound car going downhill quickly, fade away. At the line where the City of Berkeley begins and the park ends the siren went silent. The chase was over the police will not conduct a high speed chase in a residential area.

The couple asked if someone would call them a taxi. One of the observers volunteered to drive them home in his car, a couple of the racers there with a truck and trailer took their bikes home for them. About 15 minutes later Officer Ripley (pilot of the Mustang) pulled up from the north and another officer came from the south. They questioned us all as if we knew who was on the race bike. We honestly did not, never having seen that bike before. We had an idea, as only one of us able to pull off such a stunt was missing. After another 10 minutes the officers left. Just then Robb pulls up in his Honda Accord, smiling.

(*Squids are individuals low on experience but high on spending ability. They generally have a rare, high dollar factory replica-racer are dressed in factory leathers and believe that money can trump experience. Some are pretenders who scrape down their pegs with files and are happy that they have something few can afford.)