Living in New Hampshire through my formative years was a teenage motor heads dream, driving at 14 with a parent, full license at 16. I took my drivers test in Mom's new 66 VW, like everything else that comes near me, I was already modifying it before the ink had dried on the title. Dad had agreed to pay for the rear camber compensator, front sway bar, and 4 Koni shocks, I also sneaked in an Abarth exhaust. I re-clocked the torsion bars lowering the car about 2 inches. Mom was the envy of the college parking lot for her cool VW. But this story is about another VW, a 57 oval window car that belonged to a Librarian at the College. Janice had gotten the car from her dad who bought it new, it had very few miles the original 36 hp engine and one very nice option if you live in a place where the average temperature during the winter is 18, a gas powered heater. It was a tiny furnace that could heat the VW from 30 below to, "turn that thing off" in 5 minutes. On cold snowy days it was my number one choice to make the 20 mile drive from the Ski area where we lived to school. Equipped with studded snow tires it was unstoppable. I had other projects during the winter to keep the mod gene in check but as spring started to loom on the horizon I started to think of at least painting the faded out baby puke green of the 57 bug. As April began to melt the snow the 57 got a new 66 Ford Mustang dark metallic green paint.

Being in the mountains the snow melts last. The lower elevations in Laconia show their bare ground first. I had an unfinished assignment from my mechanics Master Claude Meder, that he gave me the previous summer in Florida. It was to rebuild completely a modern twin cam motor that had belt driven camshafts as opposed to chains or gears. There was a junk yard near Louden, not very far from the race track, it had a good collection of imports and some totaled race cars. This was a true junk yard not the clean organized recyclers we have today, there was junk there going back a century and it was where it fell. Sloshing through the wet ground from the melting snows I found a Fiat 124 Coupe that had been hit very hard from behind. Being a regular customer of the yard the junk man let me use the ancient 30's tow truck to pick up the Fiat and take it apart in slightly dryer and level ground. When I was done with it he pointed me to take it to a part at the back of the yard where the real old junk was. As I was lowering the Fiat my eye was drawn by something that did not seem to belong. Once I had lowered and unhooked the Fiat I walked over to the pile that had caught my eye. I thought I saw a VW headlight under a pile of hoods, as I started to remove the heavy American hoods from the late 40s and early 50s I began to see that it was not a VW at all but a Porsche. It was a silver 550 Spyder, and it was a mangled mess. Immediately my mind raced to how many of these parts I could use in other projects. Amazingly enough most of the car was there including the twin cam Carrera engine and transmission. I went to the junk man and asked him what he wanted for the Fiat engine and transmission he said $50.00, I then asked him what he wanted for the Spyder in the back of the yard. He did not remember it or how it got there he saw the mangled mess and told me $25.00 and told me to use the wrecker and load it myself onto the flat bed I was driving. 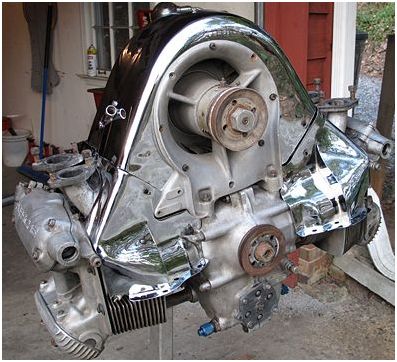 Once home I became consumed with the 550. I started removing all the sheet metal as there was not a panel that was of any use. In short time I was left with Spyder chassis that had some bent tubes and bent axles. I began measuring to plan an attack on fixing the frame. I replaced the front axle with a VW one and installed the Porsche brakes, not to get lost in the details I was able to replace the bent tubes and with a 40 hp VW engine had the chassis driving in a couple of weeks. The original engine turned over but did not run. It took three weeks and a pile of money to get an overhaul kit and a workshop manual for the twin cam engine. Ignorance and youth are bliss, the complication of that engine rivals a modern day Formula one engine. Instead of a chain to drive the 4 camshafts the German engineers used gears and shafts to connect the crank shaft to the cams. The complication of this drive train has brought many mechanics to their knees in frustration. I got lucky on the first shot and it all worked.
The engine went into the chassis and I scarred myself stupid the first time I floored it. At 700 lbs, with the 140 HP the engine was supposed to make, the acceleration would have been dragster level. Not knowing any better I diverted some of the air from the colling fan to supercharge the engine, I would estimate it made close to 200 HP.

So now I had a very fast 200 hp chassis and a very nice Beetle with 36 hp. You know where this is going. I flipped the Carrera engine and transmission so that the engine was at the back instead of the Spyders placement in the middle. I then cut the chassis side tubes off so that I could incorporate the whole thing into the VW floor pan. Put a well fitted roll over bar in the interior and welded the body, chassis and roll bar into one unit. This engine had been installed in the rear position of the 356 Spyder and coupes so I ordered an Abarth muffler for that combo. It all fit with minor modifications.

A note of humor. The first time I started the car put it in reverse to back it out of the garage, I almost went through the front wall. I forgot to flip the differential gears when I turned the engine from the mid engine position to the rear. I had 1 forward gear and 5 in reverse.

Once the gears were all turning in the proper direction it became instantly obvious that this car was scary fast and the baddest sleeper anywhere. The additional weight of the Beetle body helped keep the front wheels on the ground under acceleration, just barely, still had to be careful to not wheely under full power in first gear. It never lost a drag race on the street and only once at the drag strip when I had to let up racing a gasser and the front end got too light approaching the traps at over 130 mph, it still had one gear to go.

Everyone in the mid sixties was struggling with a way to make race cars stable at high speeds. I spend hours reading aircraft aerodynamics studies and looking carefully at what Ferrari (where I was a apprentice) and Jim Hall was doing with the Chaparral. The Beetle presented an unusual problem due to its shape. If you look at it from profile it looks like a profile of a wing, a surface to create lift. The solution was a combination of the aircraft knowledge and the work on the Chaparral. From the aircraft I learned that a simple fence or spoiler at the transition point (the crown of the roof line) would break up the lifting action, from Jim Hall I learned if I keep the air from getting under the car it lowers drag and lift. So I created a rubber dam system that was unseen from the outside and a very subtle lip on the roof.

So now to test it.
I knew that the car accelerated fast and handled real well. I also knew that it was very unstable as you approached 140 mph. In 1966 there was not much traffic on Interstate 93 after midnight. I figured there would be even less between one and two AM. So an a clear cool night I started south bound on 93. The car was stable at 140 I wondered just how fast it would go? My calculations of the gearing and the RPM's that the engine could turn in 5th gear came to a speed I was not convinced the car could really go. I got to a ten mile stretch that was hilly but did not have any major curves that might cause problems at high speeds. I worked my speed up taking the Carrera engine to 8,000 rpm in every gear acceleration was steady until a few seconds in 5th gear the progress was slower now. A curve that was feeling a little to tight forced me to lift at 7500 rpm. I gathered up the car slowed for the next safe stretch that was 5 miles away, I started accelerating hoping to at least hit red line before the downhill. I crested the long down hill run and in the distance the sky was lit up with flashing lights the interruption kept me from noticing the tachometer reading. I let up and coasted down to 70, the speed limit. As I approached the full road block I realized that this had to be a big deal. There are just not that many officers on duty at 2 AM. 4 police cars were blocking the road with guns drawn. I putted to a stop. And raised my hands registration and license in hand. I was told to get out of the car. They swarmed the car with flashlights blazing into the interior of the 57 bug, besides the tachometer there was no abnormality. Apparently they were expecting a monster V8 in the back seat all they saw was a 10 year old VW seat. “Okay kid open the trunk and engine compartment” at this point the guns were dropped and my id. returned to me as it became more apparent that I was not their suspect. After inspecting both ends of the bug and being satisfied that I was not their man one car was withdrawn to open the lane. I turned to the officer closest to me and asked, “what are you guys looking for?” “An officer 10 miles up the road said he clocked a car on radar at 168 mph, he must have been sleeping” I answered “there is no way you could get a 57 Bug going that fast” I slowly putted away, very slowly.