1969 was the beginning of my senior year of high school in Plymouth New Hampshire. By November it seemed it would be the mildest and least snowfall in a long time. I knew this as in December I was still driving my Alfa Romeo Gulietta, a car who's incredible sexy looks and great handling were completely unbearable if the temperature dropped much below 30 degrees.

1970 was going to be a banner year for Chevrolet and Pontiac, the long awaited replacement for the three year old Camaro and Firebird had the industry buzzing about a radical redesign of the GM twins. In an unusual move, GM chose not to release these 1970 sporty cars at the traditional September new car introduction, but give a dramatic introduction in January for the long awaited duo.

In mid December we received our debut 1970 Camaro Z28, it came in wrapped and it was spirited away and hidden not to be seen until the new year. 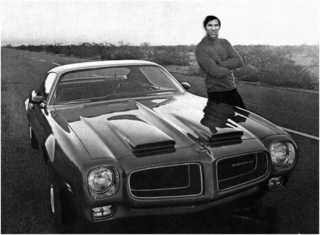 At this point I was dating Darcy Hosmer from Lawrence Massachusetts, She was a student at the Frontenac Ski camp where I worked during the winters. A total coincidence was that her father John Hosmer owned the largest Pontiac Dealership in the Boston area. On one Friday night I drove down for a date with Darcy, it was the week before Christmas I arrived a little early. While waiting for Darcy to get ready, Mr Hosmer and I talked about cars. He asked what I drove down in this time, we went outside so he could get a look at the bright read Alfa. I mentioned to him we had received a Z28, I asked what he got. We walked a few paces to one of the Carriage House doors, went inside a moment passed before he flipped on the lights. There sat a blue formula 400, but unlike the crouching stance of the Z28, this car squatted towards the rear. The scoops sticking out of the hood ready to devour any one that came close. A very subtle emblem at the rear hinted at what this was, it read Royal Oaks Pontiac! Michigan machines were the cars to beat in Super Stock right into the 70's. In those days you could order from select dealers, a race car for the street and it would get the final assembly at Royal Oaks. The Hosmer car got the whole treatment, The car left the factory as a Formula 400 with a few deleted items; deleted heater, deleted power steering, deleted rear seat, deleted insulation, deleted sound deadening, deleted spare tire and jack, deleted power brakes, deleted radio.

Once it got to Royal Oaks Pontiac the 400 engine would be pulled out and replaced by a 455 12.5 compression motor with special heads, cam, intake, carburetor, headers. A set of special chambered (no mufflers) exhaust pipes are hooked up to the headers equipped with cut outs. The Battery would be removed from the
front of the car and a larger heavy duty truck battery would be installed in the right rear of the trunk. The rear springs would be replaced with heavy duty leaves, 9 on the left 7 on the right. The shocks were replaced by specially valved 90 10 units, these refer to shocks that would allow the front to rise and stay there transferring weight to the rear tires and slowly allowing the front end to come down. A 4:56 Detroit Locker put the power to the ground from the Rock Crusher 4 speed transmission.

This car was engineered with one purpose, to get from a stop to the end of a quarter mile as fast as possible. This car was very good at that. Darcy Joined us in the drive way and gave her dad a peck on the cheek, as we walked towards
the Alfa Mr Hosmer called out to us, we turned around to see a set of keys flying through the air towards us. I caught them as he yelled. “ I don't want to hear that this car lost a street race tomorrow.”.

The noise from this car was incredible, more so inside than on the outside and it was plenty loud out there. The thrill of being in a full blown race car of a model the is not yet available and to this point kept a secret; was pure adrenalin.
With Darcy my inspiration and navigator we hit every drive in and did at least 30 races with no one even coming close to the Firebird. After a whole night of being mobbed as celebrities where ever we went we finally made it back to the Hosmer compound at 3 am where the cook made us hot chocolates, def as posts we snuggled on the couch
drinking our chocolates and we fell asleep, our ears ringing with the noise of the exhaust the tires screeching and the rush of incredible acceleration our bodies tingling from 6 hours in a factory built race car. How fast was this car? From what I was told later, this car could do the ¼ mile in the low 11 sec time, on street tires. I have never forgotten you Darcy.