Road Atlanta has hosted drift racing events for several years. While Drift Racing has grown in popularity in the last decade or more, drifting is really nothing new. If your car's rear end has ever swung around on a wet road, and you've struggled for 50 feet to get control, you've drifted. Even in car racing drifting is pretty much old school. Especially in the early days of racing when tires didn't have the grip they do now, the back end of race cars would sometimes swing out. The car would either spin out or the driver would recover from the drift and keep moving, often referred to as the four wheel drift. These days, even with tires that have great grip, the ability to drift without spinning out is an important skill in racing. The better drivers need to control a drift so they can use it to their advantage; taking an opportunity to pass than a driver who can't manage a drift.
What's relatively new is drifting becoming sport in its own right. "Drift Racing" was born in the 1990s in Japan on their winding mountain roads. It has been spreading around the world, especially to the US and the UK. 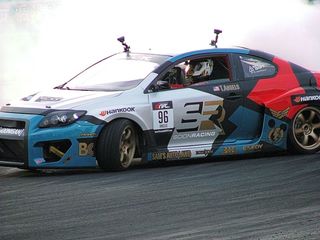 Today, at the top amateur and professional levels, drivers can drift through several opposing turns without their wheels ever gripping the road. That's where the winding mountain roads came in. Aside from the higher risk of accidents, mountain roads are ideal drifting courses. The multiple, tight, S-type turn configurations allowed drivers to display the most advanced drifting skills.
Drifting almost always requires rear wheel drive. In a basic braking technique, the driver pulls the emergency brake as he enters a turn, causing the back wheels to lock up and lose traction, initiating a drift. Holding a drift instead of spinning out requires a lot of practice. Expert drifters use a combination of throttle (accelerator) control and steering motions to control a drift, not allowing the car to straighten out, regain traction or slow down through the turn. The best drifters can maintain a drift through several turns in a row. Those drivers can expertly execute multiple techniques one after the other to maintain extended control of a drift.
Drifting competitions are judged based on Line, Angle, Speed and Show Factor. “Line” involves taking the correct line, which is usually announced beforehand by judges. The “Show Factor” is based on multiple things, such as the amount of smoke, how close the car is to the wall or designated clipping point, and the crowd's reaction. “Angle” is the angle of a car and more importantly the turned wheels in a drift, “Speed” is the speed entering a turn, the speed through a turn, and the speed exiting the turn; faster is better.
The judging takes place on just a small section of the track or circuit. The track selects a few linking corners that provide good viewing, and opportunities for drifting. There are typically two sessions, a qualifying/practice session, and a final session. In the qualifying sessions, drifters get individual passes in front of judges to try to make the finals. The finals are tandem passes, or chasing races. Drivers are paired off, and each heat comprises two passes, with each driver taking a turn to lead. The passes are judged as explained above; however there are some typical guidelines such as:
 Overtaking the lead car under drift conditions is ok if you don't interrupt the lead car's drift.
 Overtaking the lead car under grip conditions automatically forfeits that pass.
 Spinning forfeits that pass, unless the other driver also spins.
 Increasing the lead under drift conditions helps to win that pass.
 Maintaining a close gap while chasing under drift conditions helps to win that pass.
Points are awarded for each pass, with one driver winning. There are times when the judges cannot agree, or the crowd vocally disagrees with the judge's decision, and more passes are run until a winner is produced. Sometimes mechanical failure determines the race's outcome, either during or preceding a heat. If a car cannot run, the remaining racer wins the heat and may give a solo demonstration pass. 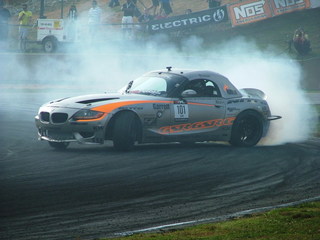 One aspect of Drift Racing is that it can be relatively less expensive to enter as an amateur. While most drift cars are modeled after the Japanese roots, any rear wheel drive sedan can be easily modified to drift. Usually, drift cars are light to moderate weight coupes and sedans over a large range of power levels. Despite the export of large number of Japanese vehicles to continents outside Japan, drifters within other countries can often prefer to use local examples as drift cars. The American market has enjoyed a huge volume of Japanese cars and locally sold imports feature heavily in American drifting. Certainly, there is the cost of tires, which clearly are used up pretty quickly. However, compared to other forms of racing, an enthusiast can get started with a used coupe or sedan and get started on a budget.
You do not need to be the racer to enjoy this sport. Spectators are drawn to it as the process is more important the Finish Line. It focuses on the driving technique that requires controlling a car in a sideways angle at high speeds. Spectators compare it often to skateboarding, freestyle skating, and Olympic sports. "Drifting is a judged sport," says Jim Liaw, president and co-founder of Formula Drift, North America's foremost drift championship series. "It's not about crossing a finish line, as in drag racing, but about performance, style and technique." It is a whole new “ball game”.
By Mike Thies – www.SouthEastWheelsEvents.com
Photos courtesy of Dave Williams Photography - http://southeastwheelsevents.com/profile/DaveWilliams

Click on any photo to see more of Dave Williams wonderful photography - His drift race photos are superb!