Ford Motors came to Atlanta in partnership with the City of Atlanta to present the Ford’s Power of Choice Tour.  We met in Atlanta, GA, on a cool Thursday morning, November 10, 2011 at The Charging Spot in Atlantic Station to hear highlights of Ford’s fuel efficient lineup and the new electrified vehicles that will be available in North America by 2012 and Europe by 2013.  We heard a very profession presentation from Eric Merkle in town from Ford Detroit, as well as a review from the Atlanta Mayor’s Office of Sustainability on the city’s infrastructure as efforts are being made to prepare for more electric vehicles, or “EVs”, as they are coming to be called.

Eric Merkle told the group that Ford Motor Company is committed to delivering vehicles with the best or among the best fuel economy.  They have 12 vehicles with best-in-class fuel economy providing a real choice when choosing a vehicle to save money and fuel. With gas prices as uncertain as they are, this is a real important issue throughout the world.  Ford offers four vehicles that deliver 40MPG and we looked at the new all electric Focus.  I am 6’7” and I fit quite nicely in this very well appointed car.  This is a very cool solid four door sedan with a very good travel range. Ford expects to be able to put them on the market in 2012. 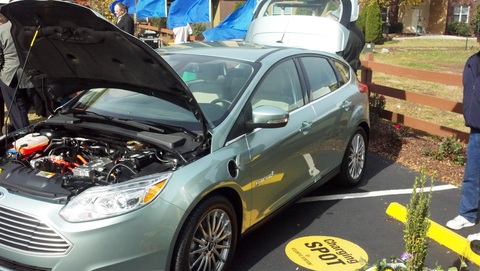 I was able to drive the all electric Transit Connect vehicle which is designed for urban commuting for “fleet” work.  It is designed like a utility vehicle, large van or small bus.  While the cargo load is limited to 1600 lbs, it offers business and government fleet owners a real alternative to expensive to operate cargo vans.  It was great to drive, easy to maneuver, with plenty of pickup and torque. I was very impressed with the large cargo area and it is all electric (NO GAS!)  You can buy them now for about $22,000 msrp

The other vehicles we were able to see there were the Ford Fiesta, the Explorer with EcoBoost and the Fusion Hybrid.  The EcoBoost, a more fuel efficient though powerful engine, is now available in the F150s.