Editorial. Although this is only a two day event, I got personally involved by having my friend and Formula Drift 2010 World Champion, Vaughn Giddin Jr., come on to our Live Radio Show on Garage71 May 5th. This apparently kicked off a wave of excitement with our listeners and they showed up in droves. I saw so many faces that I know from the area who came to this drift event for the first time. The volume of activity on our website of photo and video postings shattered the previous record. I think Professional Drifting is reaching the main stream, the heart pounding excitement of door handle to door handle competition and the non stop action of the rounds with long intermission breaks to permit a lunch break or go into the hot pits to see the drivers and teams up close, I think this is going to get bigger.  The lead article from Stephanie Gullion is a fresh look from some one that had never been to a drift event before.

Showing up at Road Atlanta’s Formula Drift 2011 around noon on Saturday, I had no idea what to expect. Most tuners would roll their eyes when I reveal that the only drift knowledge I came with on Saturday was from…yes, The Fast and the Furious: Tokyo Drift. And I had just enough common sense to know that there would be no parking decks to tear through and no mountainside showdowns to decide who would leave town, so that wasn’t going to be much help. But by race’s end at 9:30 that night, thanks to the help of my motor mentor, Miguel, and some new friends from the crowd, I not only understood drifting, but couldn’t wait to see more!

My afternoon at Road Atlanta’s Formula Drift began with a tour of the pits with racing veteran, Miguel Caparros. For any newcomer to the sport, I strongly recommend you get to the track early to check out the cars (and get a bunch of free merchandise, take a passenger seat drift ride, and enjoy photo ops with the sponsors’ lovely ladies). Drifting is nothing like your average car event—cars go through the track in tandem, and being first to the finish line is not the objective, that’s why getting an up-close look at the inside of the cars goes a long way to understanding what’s important on the track. How many other racing styles involve applying the hand brake and body kits that are designed to fall off the car on impact? The sponsors’ spokesmen are always nearby eager to answer questions (and plug their products of course).

Although the professionals weren’t set to face-off until 4 o’clock, the practice (beginning at 2) was nearly as exciting as the main event. It is clear that the drivers love what they do, and aren’t going to miss any chance to show off their skills and get the crowd pumped up. By the time practice got started, the track was already packed and the scene was one giant party with tents, grilling, and drinking.

Unlike other racing styles and events with long-standing traditions and unspoken etiquette, newcomers to Road Atlanta’s Formula Drift were enthusiastically welcomed by the crowd and the announcer clearly explained the rules and judging decisions throughout the event so that no one was left to guess what was going on. With only a 12-year history in the United States (the 8th year at Road Atlanta), everyone involved is eager to help the drift following grow to keep events like this coming back and bring more to the area.

As for the heats themselves, well you just had to be there or watch the videos on South East Wheels Events . Suffice it to say, they didn’t disappoint! Ranging from over-eager drivers skidding straight into the “kitty-litter” on the first turn, to perfectly synchronized runs, to mechanical failure and even a fiery wreck, Formula Drift at Road Atlanta, literally had it all.

While I don’t feel that my day-long immersion into drift car racing qualifies me to go into the subtleties of the sport, if you’re interested in finding out more, I encourage you to check out Formula Drift’s website (http://www.formulad.com/) and www.drifting.com to learn more and catch a live streaming of Formula Drift events. Hope to see you next year for Road Atlanta’s Formula Drift 2012!

That's right, if you noticed the haze in the sky around Atlanta this weekend don't worry...we was all up in smoke after a few of the 800+ Hp beast at Road Atlanta roasted their tires. May 6th & 7th Road Atlanta hosted round 2 of Formula Drift , a 7 round drifting competition that started April 8th in Long Beach California and will end in Irwindale ,California Oct. 8th . This makes the 8th year Road Atlanta has hosted the Formula Drift event and word from the web is they have 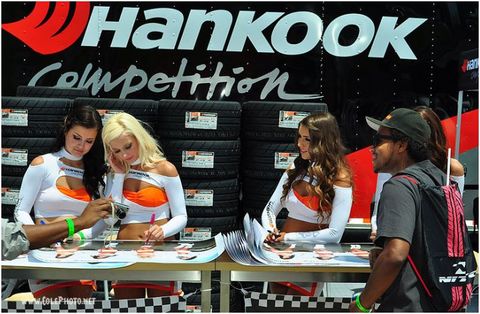 confirmed a 3 year extension for this completely intense show of driving skill. Friday started off with Pro/Am practice and qualifying ,which is held in the turn 10 complex of the track. A cool bit of info I heard announced is that 8 years ago the horseshoe ( 10b) was created just for this event. A starting line that's a straight shot downhill where the goal (points wise) is to hit 80mph before the left-hand turn,and if you mess up just a little...you end up in the gravel ,which is nick named "Kitty litter" and a few found it on both days. The right-hand to left-hand turn into the horseshoe is uphill until the exit which made for some of the best full throttle high rpm drifts , the smoke clouds would sometimes hide spectators on the other side of the track...it was just too cool. Another little extra Friday was seeing F2000 series race, it went down during the break in drifting action. Saturday, was PACKED out. I thought by getting there early I would find a good parking spot , haha never mind the spot I had a hard time with the crowds of fans along the road. Making my way to the pit's to cover that scene I noticed the diverse fan base, from young to old , mostly all carrying or wearing Nitto, Hankook, Falken etc. gear. Trying to capture the scene and get good pic's in this highly crowded area I used my wide angle lens & my height to my advantage. Most of the drivers & crew could be met down there, just hanging out tweaking on the cars, prepping for the big day. The Formula Drift scene knows how to show their fan's a good time, I was even able to meet many of the drivers, not to mention Vaughn Gitten Jr (2010 FD Champ) , you know, I got a picture with him. This event makes you feel so much a part of the sport (minus the driving) that you just stay entertained all day. When it came time for the main competition of a field of 32 the bleachers were packed , and you could feel the excitement all around. The sun was setting creating a warm glow on the track and when the cars put up all that smoke and made the turn out of the horseshoe their headlights would barley creep through the cloud , just making for such a cool sight to see and hear. If anyone gets a chance to go to a Formula Drift event (or any drift event) don't miss out, it's a cool motor sport that's fun to watch.and to be apart of !

If you want to see more of Jason's Photos Click Here!