I recently bought a cherry '93 Ruby Corvette (the 40th Anniversary model) which had been stored all its life.  In recent years it was garaged, and driven very little.  Even though it has fairly new good quality Nito tires, I noticed a very serious shimmy in the balance at about 60 to 70 mph on the Interstate highways.  I took it over to Butler Tire in Buckhead (Atanta) on a recent rainy Saturday morning.

First, it was the only dynamic balancing place I could find that was open on a Saturday. In Atlanta, one of three of their locations, they are open until 1pm.  Second, I wanted a company that knew how to care for my special aluminum rims. While I knew it was going to cost more than the bubble balance job I could get at Walmart, I sensed that this was a different problem and I was right.  It turns out that, likely due to being garaged so much, three of the four tires had flattened a bit creating something they called "egg shaped wobble"!  The technical term I found on the Internet is "Run Out Imbalance" (Excessive radial and/or lateral movement resulting from tire or wheel/rim non-uniformity, improper bead seating, or improper match mounting of the tire and wheel/rim assembly. This can be corrected by measuring the amount of tire and wheel/rim assembly run out (lateral and radial) with a gauge, and replacing the component having excessive run out.) This is apparently tough to cure.

In three of my fairly new, almost unused tires there was excessive Run Out Imbalance.  This is not good since it was not in the plan to replace new, almost unused tires, which I can only guess are not cheap!  After conferring with the technician, I made the only desicion I could that morning, which was to have them just do the best job of balancing the tires that they could.  This meant that the problem tires were to taken off the rims and moved around to see if the excess wobble could be reduced by a different placement on the rim!  This is a lot of extra work for a young man who is supposed to get off at 1pm and has a line of customers waiting on him.

The impressive thing was this is exactly what he did.  Now, Corvette tires are not small, light weight items, as anyone having removed and installed tires knows.  It is not an easy task even with the proper tools and machines.  The staff at Butler worked on  my car for over two hours to get the balance correct!  They did not charge me extra, perhaps because they felt bad for me that I will likely need to buy new tires soon.  They also really liked the car, I think!

The good news it that the wobble vibration is significantly improved, thank you to the heroic efforts at Butler.  The fact that it is not gone entirely means, that at some point, the tires need to be replaced to completely cure the issue.  That will have to wait, though, as I have other budget demands for now.  I shouldn't be going over 65 mph anyway. (Yeah, right!)

I am very pleased to report that us hot rodders have an ally at Butler Tires. They really get what we are dealing with: budget concerns, stored vehicles, and our uncompromising standards of performance.  We always want things to be correct and functioning properly.  It bugs me when they are not and usually I don't have the skill or nearly enough money to get it fixed right! In this struggle we have many supporters and we can include Butler Tire. 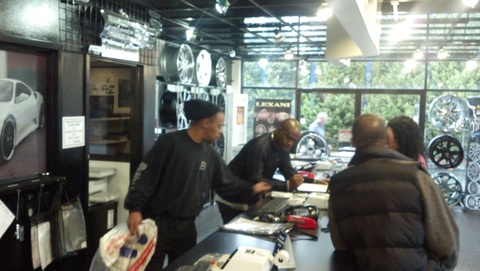 (Above) It is a busy morning at Butler Tire. (Below) Butler's true genius: President/Owner Mel Dobrin. 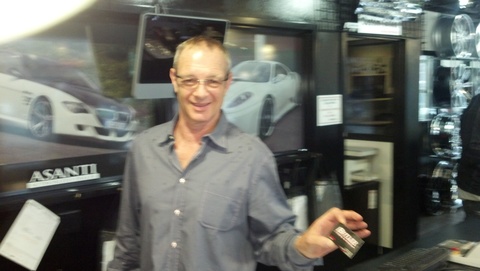 Comment by Dale Boyd on January 23, 2012 at 3:08pm
That sucks about the tires, especially considering how low the mileage is on that car. My Z had that same issue even after I first changed wheels and tires. I too had that high priced balance done and it did help quite a bit but it was still there, forcing me to drive at 85 mph, LOL. After I changed the car to 5 lug hubs and axels which required new wheel bearings on all 4 corners and new wheels and tires the problem went away. Of course my car is 35 years old and I'm sure the rear bearings were original since they are not easy to install (requires dropping all the rear suspension and pressing the stub axel out and pressing the new bearings off and on). The fronts had been changed when I first got the car and repacked and reinstalled a few years later during the disc brake upgrade.
But with the low mileage on your car I doubt you have bearing issues, not sure if sitting for long time can damage wheel bearing..... its possible I guess.