A major number of polls and surveys have agreed the Ford Model T was clearly the world's most influential car of the 20th Century.  Henry Ford has often been credited as the pioneer but actually the real pioneers were in Europe and the “automobile” had existed for decades. It was true, though, that their public adoption had been limited, and they were mostly scarce and expensive. What Henry really did is put together the team that designed and mass produced the Model T!  It was started in 1908 as a car for the mass market,  and by 1927 fifteen million Model Ts were produced and sold!

Henry Ford said, "I will build a car for the great multitude. It will be large enough for the family, but small enough for the individual to run and care for. It will be constructed of the best materials, by the best men to be hired, after the simplest designs that modern engineering can devise. But it will be so low in price that no man making a good salary will be unable to own one – and enjoy with his family the blessing of hours of pleasure in God's great open spaces." 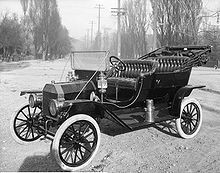 The Model T had a front-mounted four cylinder 20 HP engine that would run steady at about 35 to 45 mph. The engine ran on gasoline, kerosene or ethanol.  Gas was cheaper and easier to find and quickly became the standard fuel used.  Henry was a pragmatic, steady and proud engineer, whose accomplishments had gargantuan impact on the world. His Model T was the cornerstone of whole new industries, cultural change and economic growth.

He was reluctant to let it go. Yet into the mid 1920’s, many of their competing manufacturers had adopted Ford’s methods and were coming up with designs, ideas and advancements of their own.  By then, Edsel Ford, Henry’s only child, was President of Ford Motor Co. and was concerned about losing out to competitors and saw the Model T start to fall behind in sales. General Motors and others, caught up with Ford's mass production system and began to outcompete in many areas, especially by offering more powerful engines, new convenience features, or cosmetic customization.

While all reports tell of Father & Son love, regard and respect for each other; they were very different men. As much as the “Father” was a pragmatic engineer, the son was a visionary, artist and an idea man.  It took a great deal of convincing, but finally Henry effectively gave the “gavel” to Edsel to get the team together and build the next generation Ford car.  His team took on the challenge, actually shutting down all plants and starting all over, unheard of!  Out of it came the Model A! They was started in 1928 and Model A’s were built through 1931. It was instantly the second huge success for Ford Motors.

By February of 1929, one million Model A’s had been sold and they sold almost 5 million before production ended in 1931.  Prices ranged from about $400 to $1400, with a range of models, styles, colors and services (i.e.; Coupe, Roadster, Convertible, Sedan, Phaeton, Station Wagon, Taxicabs and Truck).  The engine was a water-cooled 4-cylinder of about 40 HP with a top speed of 50 to 60 MPH.  Edsel’s team argued for standardized controls as previously different makes all worked differently.

Although clearly and hugely successful, the Model A’s development had many problems that had to be resolved.  Henry's disdain for cosmetic vanity as applied to automobiles led him to leave the Model A's styling to the team led by his son Edsel .  The introduction of the new car on December 2, 1927 in New York City, drew over 10 million people to view it. The car exceeded all expectations and Ford sales skyrocketed and they once again became leader in the automotive world. 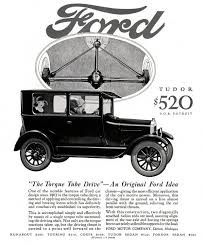 Note: Edsel Ford designed and built his own car, a remarkable machine with many modern features far beyond his Model A.  It is now on display at the High Museum’s exhibit “Dream Cars” in Atlanta through September 7. 2014!  It is told that Edsel drove the car often, even though his father disliked it immensely!  It is a Speedster with an aluminum body and headlights mounted at the axle height.  There are twin-windscreens, no doors, and the overall effect is that of a pure racing car.  Edsel has no intention of producing any of these cars in quantity, and for the most part he kept them out of his father's sight.  Seems Edsel kept his speedsters inside a gardener's shed at his home. 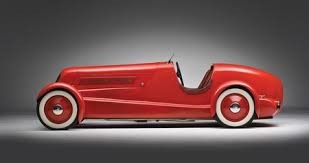