We all had a great preview in Charlotte early in February at the highly successful “NASCAR Preview 2013”.   It offered fans a good look at into NASCAR’s new season and had invited the Hot Rodders Of Tomorrow to demonstrate the kids’ competitive skills. Hot Rodders of Tomorrow (HROT) is a nationwide High School automotive engine building competition.  The demonstration at NASCAR literally stole the show!  The NASCAR fans truly enjoyed seeing the speed and coordination of the HROT teams. 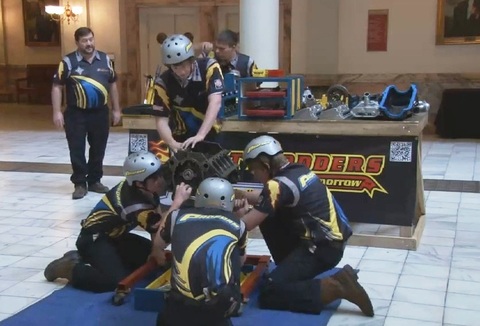 The HROT Preview was a good forecast for this week’s season opener at the Race & Performance Expo in St. Charles, IL.  As many as 20 schools are expected to compete for trophies, scholarships and “bragging rights”.  HROT had a hugely successful season last year with challenge events around the country including the annual SEMA (Specialty Equipment Manufacturers Association) show in Las Vegas!

The 2013 schedule starts at this week’s Expo and finishes up with the National Championship in December in Indianapolis at the Performance Racing Industry show. (See the whole events calendar:  http://www.hotroddersoftomorrow.com/events.htm)  High schools from all around the country will be competing!

HROT is a completely volunteer organization from all around the US!  The true leadership credit for the success of HROT needs to go to the team of James Bingham, who is on the Board of SEMA and operates “Winners Circle” in Joliet, IL.  He has built a team that has brought HROT to the point where it is one of the most active and visual groups working to bring young people back into the automotive industry!