I have been covering the Gathering at the Sonic on Riverside Drive in Lawrenceville, GA off and on for several years.  I always enjoyed the cars, the company and friendship of the young people that gathered there every Thursday night and the diversity of the groups.  This was one place where everyone got along, mostly. The few times when there was a bit of drama; it was a burn out (smoky), a foolish move like jumping a curb (it was videotaped), and showing off on Riverside on one's way to Rt 316.  And then again, there were the cars (and often some very cool bikes). No one was ever injured and everyone was having a good time.

Well, I guess not everyone. The kids are no longer welcome!  According to B. M. Yenerall in Security for Wheeler/Brand Management Company, they all have been very patient with the impromptu gathering of cars and young people each Thursday evening, in the parking lot next the Sonic across from the QT on Riverside. The tenants and businesses have been complaining for a long time, and now the informal event is evicted, effective immediately! There were local Police on hand to insure that everyone was leaving; even me. Anyone returning was threatened with arrest.

According to Mr. Yenerall, there was a hotel near by (I didn't know that, but then, why would I?) who has been especially disturbed by the din, and all the tenants wanted their parking lot back.  And, it is their right.  He gave me his card and said he hoped I put my video on YouTube.

It is too bad, though. It was a really enjoyable time for everyone and I cannot imagine where they kids will go to have some social time and admire each other vehicles.  See the video of the meeting with all the participants - Click Here! The photo on the left is of a young solider, Danny A., on leave for two weeks and came over to see some old friends and to show off his very clean, 2004 Turbo Mustang! He has been ion the Middle East and will be going back next Tuesday, May 10.

The next photo below is of a very nice and interesting young couple from Wisconsin. They just moved here and have been looking for car events and hoping to make "gearhead" friends.

The car is a beautiful BMW E46 M3 which they have just purchased. It is a very clean car. Brett P., his wife and his car.

Then, I had the privilege to talk to this trio of real fine and friendly young folks, "John, Star & John"! They were saddened to see that the event will not occur any more, and are hoping to find another location. 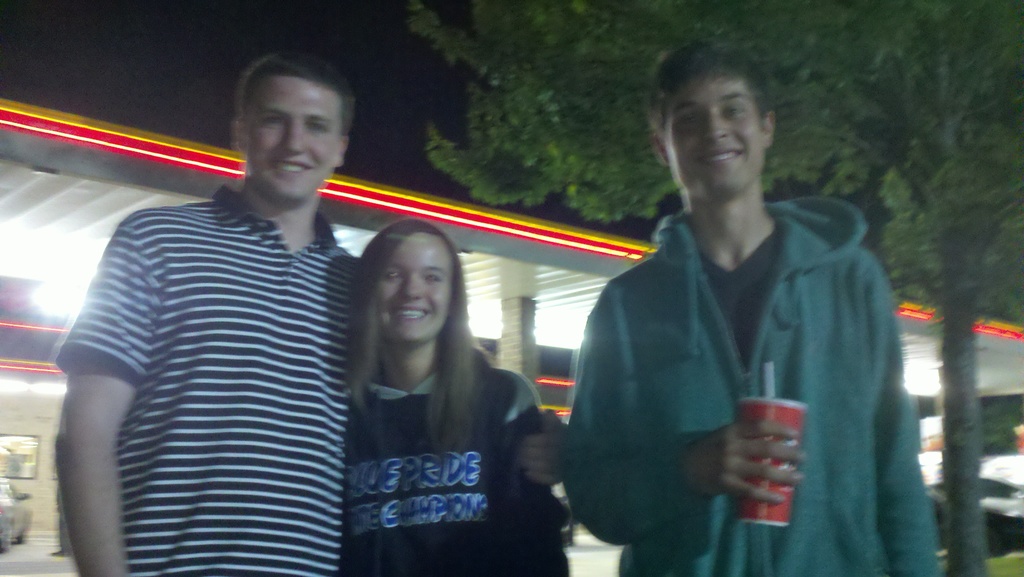 If anyone hears about a new location (where they hopefully have permission), please post it on the Events Calendar.