Mark Ray and The Plane Car!  By Mike Thies

The Plane Car!  By Mike Thies

I met Mark Ray on a sunny Sunday morning in 2015 at a Caffeine & Octane meet in Alpharetta. I saw the boat car and had to meet him.  I think it was the first event he took his new “Boat Car” and he was clearly excited to show it off.  It was red, and quite remarkable.  It looked much more boat than car for sure, but when asked if it did okay in water, he said with grin, “It sinks!”.  He said he built it because someone said he couldn’t do it. He clearly likes to win his bets. It was a combination of a Sea Ray and GMC Jimmy.

He built it, with no significant mechanical or engineering training, from just an idea; working with local shops and car enthusiasts!  He admits to having a number of “blind alley” efforts but learned along the way to get where he wanted to go.  That is Mark!

He is very likeable and easy going, yet he is a driven entrepreneur with a good number of highly successful businesses under his belt.  He is a “car guy”, having hundreds of cars bought and sold over the years. The boat car was (and is) very popular with car show participants and spectators.  It has won numerous awards including Best-In-Show at the Peachtree Corners show in 2015.

Then, using his new confidence as a builder, he decided to make a plane car!  Not one, but two.  So far. The first one is a combination of a Chevy Tracker and a sidelined fiberglass 2003 Cirrus SR-22!  He contracted some of the larger aspects of the build but did the finishing himself and made it street legal, using his boat car experience.  From there he went to much bigger project.

He found a GMC Sierra pickup and a 1974 Cessna twin-engine Ram in great shape; and with six months of work, here is the newest, biggest plane car yet!   It is 32 feet long and 12 feet high at the tail fin.  And ever the creative entrepreneur, he will rent advertising space for local businesses to grab customers’ attention when it is rolling the road! You gotta love fresh ideas! Check out the video at http://southeastwheelsevents.ning.com/video/the-place-car

Keep an eye out for it! 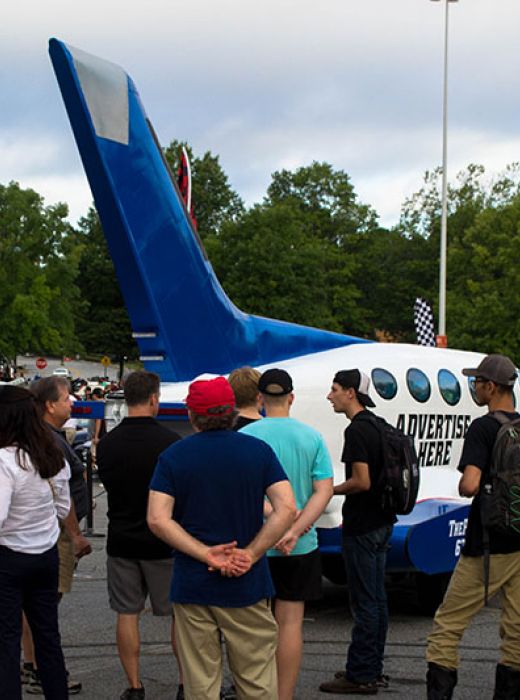