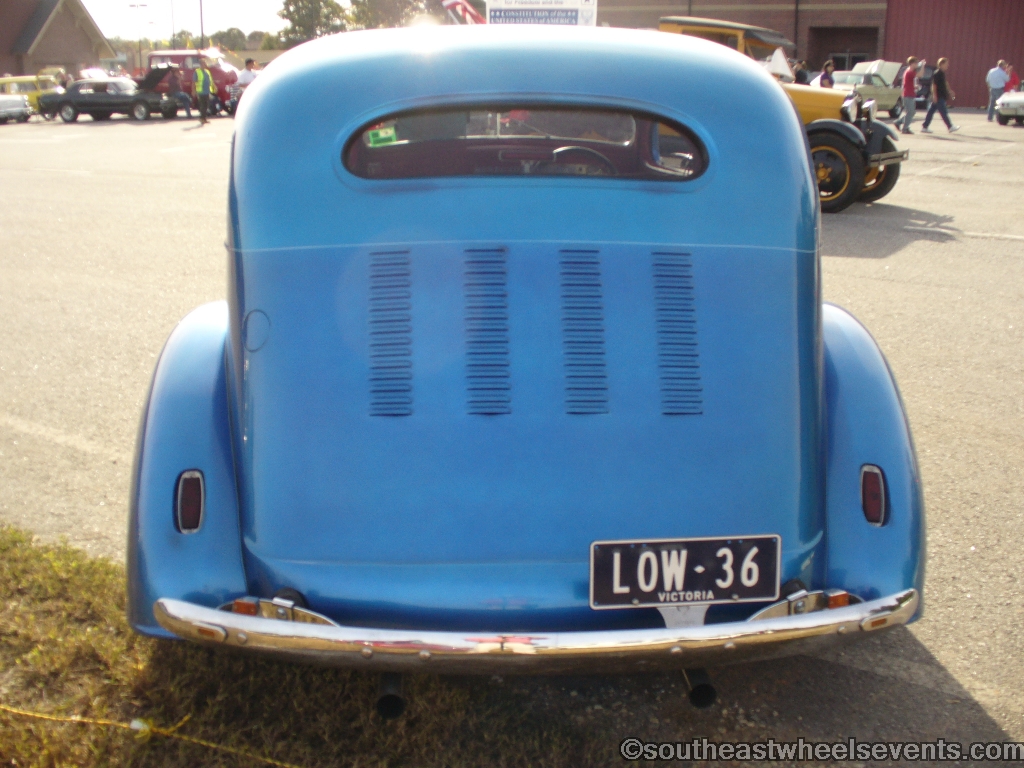 Miguel.
Good to meet you at the Moonshine show on Saturday.

As you know I am an Australian Rodder currently travelling around USA with
my Aussie 36 Chevy, seeing as many rod events and tourist things as I
can in the time allowed.
You suggested that your members might be interested in hearing what I am
doing and how I got to be here, so at the risk of boring everyone I
will write a bit of my story.

Back in Australia Hot Rods are every bit a big as here and I have been a dedicated rodder for my whole
life. I first built the the 36 Chevy in1978, also have a 32 Ford Vicky I
built in1998 and a 37 Ford Cabriolet under construction. For the last
20 years I built up my company Hoppers Stoppers, www.hoppers.com.au
doing regular vehicle repairs, plus always a few street rod builds,
repairs and turn key's, but more lately Big Brake kits and some
industrial mining brake stuff. We turn out a few thousand brake kits per
year for the Aussie market and employ 12 guys, so Hot Rodding has been
good to me. In Australia we can retire and take our superannuation at 55
so for the last few years I planned that I would let my employees take
over running the business and and would do a dream tour of USA as soon
as I could. So now they make the money and I just spend it. (they get a
share)

their life nearly every Aussie Rodder makes at least one visit of the USA rod scene and does the big shows like the Louisville Nationals,
plus all the usual tourist places, some many times, but usually only a
few weeks at a time. I decided to go one step further and spend maybe 6
months to a year doing all the NSRA and Goodguys events plus lots in
between. I could bring money and buy an American Street Rod to drive the
country but something appealed about shipping my faithful 36 Chevy over
and driving this old Right Hand Drive sedan around instead. Its always
been a good road car and is really happy driving your nice smooth
freeways at 80MPH when your nice cops let me.

So in early July I pay $2500 and the 36 was put on a boat back home in Melbourne and a few weeks later we have a send off party and I get on
a plane to LA. The plan here was to spend the first few months on the
east side of USA then travel over to the west once winter sets in.
So first stop is Houston where I buy a Motorhome to live out of, and
trailer, then I have arranged to fly back to LA where the Chevy is due August 23rd. Plan was to drive the 36 LA to Houston, load on to the trailer and go north for a few shows.

However we have a bit of a stumble at the first step, it turns out the "Roll on-Roll off" ship that was meant to take the 36 to Long Beach
got involved in a despute between the Ship owners and the Charterers and
my car along with 3000 new Japanese cars has been unloaded in Auckland
New Zealand. It's gunna be another 8 weeks before the next RORO ship
come past and she's sitting in the salt air on the wharf. So a few
nasty emails to the shippers and they agree to put it in a container and
ship it asap. New arrival date now Sept 10th
so the car won't make the Goodguys Kansas City event and the NSRA
Kalamazoo and Goodguy Joliet shows are in doubt. Never mind, I drive the
RV to Kansas, see the show, then head to Illinois where I rent a car to
see Kalamazoo. By then the 36 should be in LA so fly out of Chicago and
get to Long Beach. The Container Ship arrives Sept 10th
but USA Customs are not going to let me have it without a stack of
paperwork so I cool my heels and do tourist things like Peterson Museum
and Disneyland for another week. On Friday
17th they release my car. Revised plan now is to drive to Vegas , over
the Rocky Mountains to Denver and across the flat lands to Joliet, only
thing is, I've missed the Joliet show so first event for the car will be
Pocono in East Pennsylvannia. They get the container to the depot late in the PM, this is fun, unload and off into LA traffic 5.30 Friday afternoon and it seems everyone is going to Vegas for the weekend.
Steering wheel on the wrong side, don't forget and I am doing it by
satnav, no idea where it is taking me..Thermo fan has stopped working
too, but get to Vegas late Friday, check out early Saturday
and off into the Rocky Mountains we go. Small issue with the fuel pump
cutting out is traced next day to a security switch that I put in the
wiring and by Monday I
am in Joliet. Poor old Chevy has been up to 12000 feet , not something
we have in Australia. Find the faulty relay for the fan and load up and
head to West Pennsylvania which is a few hundred miles from Pocono. Nice
time at the show and did 110 MPH around the Nascar track but that's
nothing new, this old girl's done 125 on our Aussie salt lakes back in
1995. By now the car has 2700 miles under its wheels in USA in it's
first week here.

After this trailer a bit south and do Carlisle Swap Meet, and a few tourist things like Gettysburg. next stop is where I am writing this
from, just out of Atlanta GA. From here the 36 has done the drive south
to Tampa for NSRA show, went to Space Centre and Don Garlits Museum,
then back here for a few days. Last week north-west to Bowling Green for
Goodguys Nostagia Drags and this weekend a quick trip to Dawsonville
for the Moonshine run. Speedo now shows over 5000 miles driven in 5
weeks and next week off to Charlotte for the event at Lowes speedway.

Have picked up a few long distance trophies as you can imagine.

After Charlotte have booked to fly to Vegas for SEMA, then because of 90 day
Visa Waiver immigration laws have to leave USA for a few days then
return to continue on. Good opportunity to go to Jamaica so Chevy goes
into a storage place for a few weeks then we go west, load up back in
Atlanta and onto California from there.

I'll let you know how I go from there.
Keep on Rodding 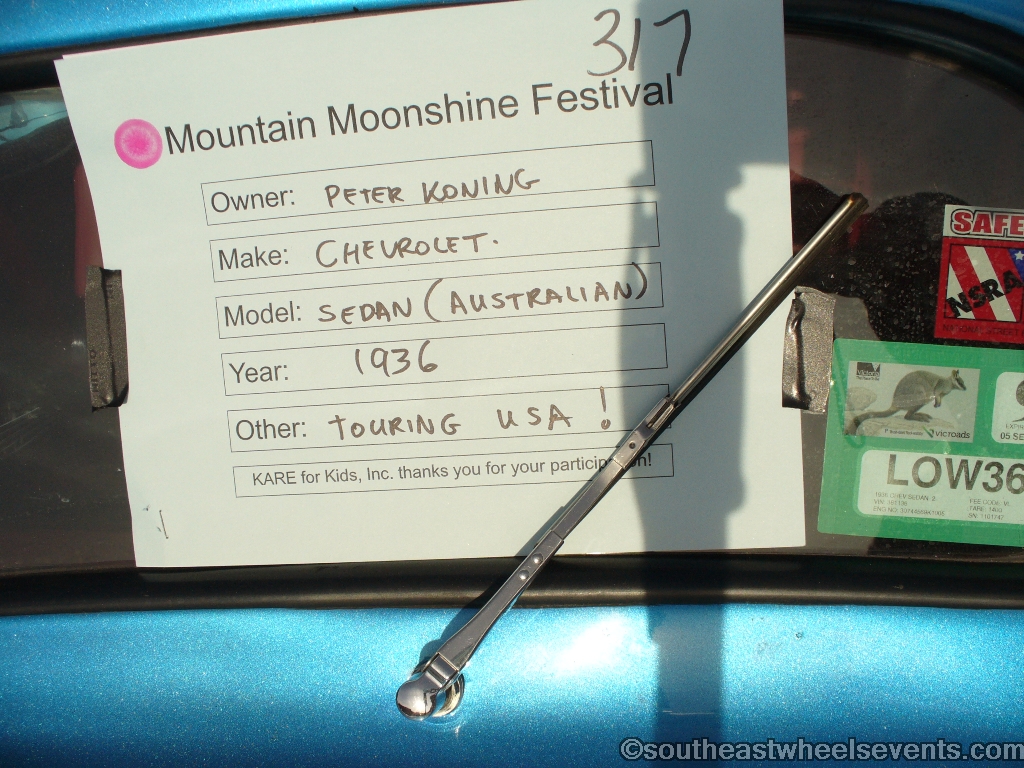