CARLISLE, PA – Spring Carlisle delivered in 2012, proving that Carlisle's second longest running event is as fresh as ever. The weekend featured great weather, more than 100,000 show goers, celebrities, sold out vending from fence line to fence line, and at its peak, saw shoppers four and five deep in the vending area and lines at the food court.

With a majority of sunny days throughout the weekend, Spring Carlisle launched with set-up day on Wednesday followed by four great days of sales. Beginning on Wednesday, vendors and buyers came from far and wide to stage for what turned out to be a spectacular weekend. Highlights included Philadelphia Phillies manager Charlie Manuel at Carlisle on Thursday, the two-day auto auction presented by Auctions America by RM on Thursday and Friday and the future of the automotive hobby on display with the Hot Rodders of Tomorrow Friday and Saturday.

As part of the two-day auction, Carlisle Events and Auctions America by RM worked together to move nearly 300 cars across the block in front of a packed Carlisle Expo Center on Thursday and Friday evenings. The auction attracted bidders from 28 states, Canada, the Netherlands and Switzerland, in addition to numerous phone and internet participants. With standing room only crowds, bids flew at a fever pace, producing a 51% sell through rate for a total of $2.4 million over the course of the weekend. The totals reflect all buyers' premiums as well. In addition, a 1957 Corvette was the highest selling car, going for $99,000.

“Auctions America is all about getting people into the collector cars they love,” said President Donnie Gould.

On grounds at Carlisle, swap meet and car corral excitement progressed at a fever pitch before, during and after the center stage attraction, the Hot Rodders of Tomorrow (http://southeastwheelsevents.com/page/hot-rodders-of-tomorrow). Five schools and more than a dozen teams consisting of high- school-aged tech students battled as part of an engine build competition that saw teams of five tear down and reassemble a Chevy small block engine. 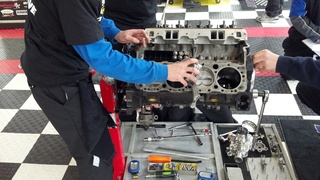 The winning team and top four finishers for that matter came from Salem, Virginia and the Burton Center for Arts and Technology. This was Burton's second win at Carlisle, completing the task in 29 minutes, 10 seconds. The Burton students not only earn $5,000 per student in scholarship money, but also a trip to the finals at SEMA in Las Vegas this fall. In addition, the second place team earned $3,000 per student, while $2,000 per student went to the third place team. All other teams earned $1,000 per student for simply participating. 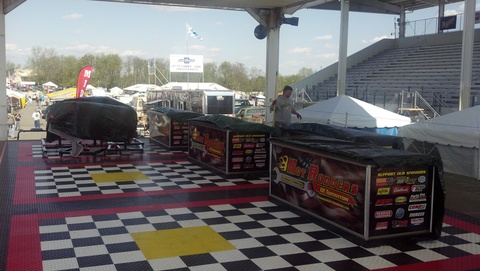 "Spring Carlisle has become a staple in the lives of many car hobbyists, as it has mine," commented co-owner Lance Miller. "Spring Carlisle weekend has become a reunion for many people visiting and we’re honored and thrilled to provide an outlet for many car enthusiasts to enjoy such gatherings," added Miller. "Spring Carlisle launched our season right and we’re glad to have this strong momentum from our first event. We hope that it continues throughout the rest of the season. We’re eager to see many more smiles during the rest of our events this season. The automotive hobby is extremely strong right now and this event showed its force. Life is good!”

About Carlisle Events: Carlisle Events, host of 10 annual collector car, truck and motorcycle events, attracts more than half a million people to its 150-acre facility in Carlisle, Pennsylvania each year. Included in the annual events schedule are two huge automotive swap meets and auctions –Spring and Fall – and individual specialty shows featuring Corvettes, Fords, GMs, Chryslers, trucks, motorcycles, imports and kit cars, and tuner and modern customs. Founded in 1974 by friends Bill Miller and Chip Miller, the “Cars at Carlisle” shows attract automotive enthusiasts from around the world. Information about Carlisle Events and Carlisle Auctions is available to consumers via the Internet at www.CarlisleEvents.com and www.CarlisleAuctions.com