In 1961 General Motors Introduced a 215 cubic inch all aluminum V8 for the new compacts from Buick,Oldsmobile and Pontiac. The Skylark, F85 and Tempest models were available with an economic low compression 2 barrel version of the new engine that had a rated output of 155 horse power (hp). The 4 barrel high compression optional engine was listed at 200 hp. Oldsmobile offered a third version of the alloy V8 labeled the JetFire that added an optional turbo and boosted power to 215. 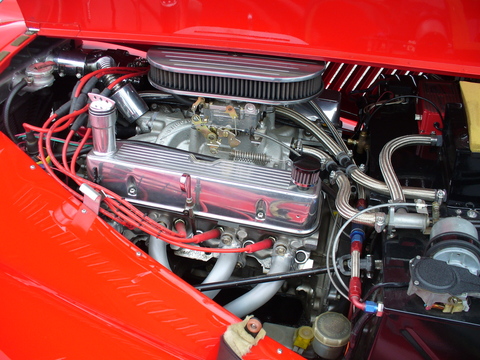 This engine had a very long development with GM, going back to 1951. GM decided they were going to have compete with the sophistication that the Europeans were beginning to show as they rebuilt from the devastation of World War II. From the beginning this engine was special. First making an appearance powering the GM 1951 show stopper the LaSabre XP-300.
During the development period the engine was supercharged to an output 375 hp from its 215 cubic inches, a power output unheard of at the time for such a small engine. Through the 50's GM developed the engine and eventually was it introduced in the Buick Pontiac and Oldsmobile import fighters.

Just at that point philosophy at GM changed and cars got bigger and heavier, the “horse power war” was under way. Buick took and adapted the architecture of the 215 V8 engine for its big block series of engines that were cast iron and ranged in displacement from 330 cubic inches to 455.

In 1967 England's, Rover Cars had a wonderful luxury 4 door sedan with incredible handling a legendary reputation for safety and terribly under powered. The Rover 2000 TC (Twin Carbs) was the predecessor for today’s sport sedans from the likes of BMW and Mercedes. To maintain its edge tiny Rover needed an engine and found that GM was willing to sell the rights and all the equipment to build the small all aluminum V8 for very little money. Rover instantly had a performance engine that took 200 pounds off the front and doubled the horse power potential of the Rover 2000. The engine survived the various mergers and take overs that the British auto industry went through. The engine was fitted into Land Rovers, Leyland Trucks, MG V8, Triumph TR8, TVR's and various other smaller manufacturer that bought the engines for their limited production sports cars.

Back to the story of the Buick/Rover V8, in 1966, a new 3-litre formula was created for Formula One to replace the unpopular 1.5 litre formula that preceded it. The new engines under development by other suppliers all had at least 12
cylinders and proved difficult to develop, being heavy and initially unreliable. F1 driver turned car builder Jack Brabham took a different approach to the problem of obtaining a suitable engine. He persuaded Australian engineering company Repco to develop a new 3-litre eight cylinder engine for him. Repco had no experience in designing complete engines. Brabham had identified a supply of suitable engine blocks obtained from Oldsmobile's aluminium alloy 215 engine and persuaded the company that an engine could be designed around the block, largely using existing components. Brabham and Repco were aware that the engine would not compete in terms of outright power, but felt that a lightweight, reliable engine could achieve good championship results while other teams were still making their new designs reliable.

The combination of the Repco engine and the Brabham BT19 chassis worked. At the French Grand Prix Jack Brabham became the first man to win a Formula One world championship race in a car of his own construction.

So this was a case of the little engine that could! During the gas crisis of the mid 70's, GM was caught with inefficient and heavy series of 4,6 and 8 cylinder engines and tried to buy the engine back from British Leyland Motors that had absorbed Rover along with MG, Austin, Jaguar, Triumph, and a few others. By this point BLM was installing the engine in almost every single one of its lines of cars and trucks. Development on the engine continued until the acquisition of Rover by BMW in 1994.


In 1968 Morgan was the first to raise their hand and say “we'll take some”. The Rover V8 more than likely saved Morgan as the new  found power and the fantastic sound of the V8 is well worth the admission for driving a wooden car designed in the 30's. The fate of the engine is up in the air after BMW sold Rover to Ford sold it and Jaguar in 2008 to Indian car giant Tata. I am sure we will be seeing the “small block Chevy” of the rest of the world coming to us from something made in India.