Videos From The UPS Show, Horsepower Breakfast This Sunday

As most of you already figured out, if I had not taken the automotive path, I would be a musician. I am totally all embracing as far as music is concerned from Classical to Heavy Metal and all points in between.  My friends in New Hampshire will remember that I was in a band by the name of, The Baker River Valley Blues and Jug Band. So blue grass is a great outlet for me. I used to play a mean jug and if I got loose enough a pretty good Harmonica. So all I ask is that you give some thought to coming out to the lodge @ CopperHead for the North Georgia Blue Grass Festival. Come in your Rod or your Cycle and lets have a good time. 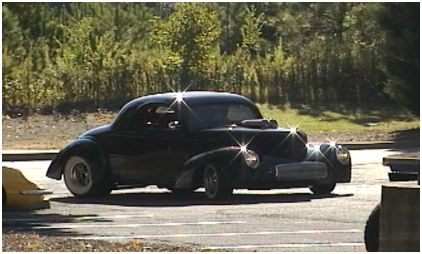 Larry Shaw has to be one of the best car builders, who does not do it for a living, anywhere. The attention to detail of his 34 Chop top Ford made it always a contender for best in show. The great thing about Larry's cars is that they are drivers. His philosophy is that you should be able to hop into it and be able to drive it across the country. His latest hot rod is this 41 black Willy's with a big blower peaking out of the hood. Check out the rocking video and the great music that comes out of the exhaust and the blower at the end.

This Saturday there is a very fast moving car show at Road Atlanta. It is better know as Historic Sportscar Racing, organized by Atlanta's own HSR. For all you young pups out there, just remember that these cars are still 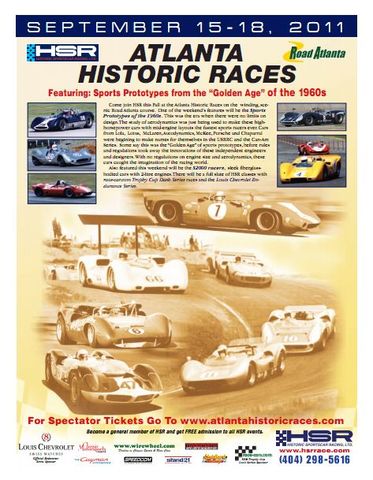 blindingly fast. I will be there shooting some video and visiting a few friends. Many of these cars are one of, and many are lone survivors but they are lovingly being used as they were designed. 600 plus horsepower engines, 1200 lbs of weight made for car that accelerated like nothing else and could exceed 200 miles per hour. These sports prototypes also referred to as Can Am, were the edge of technology but they were also deadly as driver safety was in its infancy. Take an up close look at these cars, look in the cockpit and notice that on some cars all that separated the drivers back from the crank shaft pulley was a very thin piece of tin.

These cars were also the test bed for aerodynamics. As speed increased the shape of most designs of the late 50's and early 60's made the body behave like a wing and created so much lift that the cars would get air born. The search for ways of reducing lift with spoilers like on the wing of air craft and eventually Jim Hall for his Chaparral created an upside down wing that would tilt under braking to provide more down force in the turns. This was the surpassed once again by Jim Hall with the ultimate down force car, the vacuum sucker. Look at it as a hover craft in reverse. Instead of blowing air to lift the car Hall used two auxiliary snowmobile engines driving two very efficient fans at the back of the car to 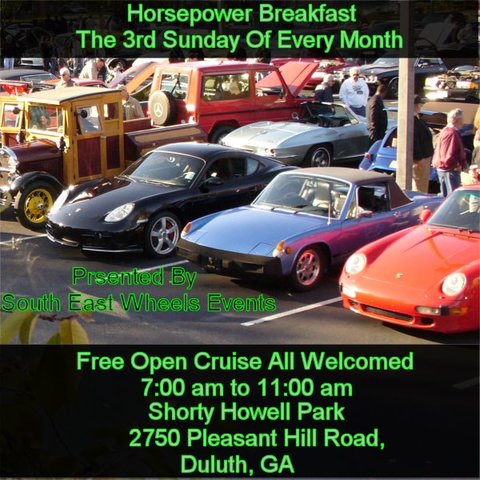 suck the car down onto the ground. All this was possible by skirts that kept air from getting under the car and the fans created a sucking power that made the car stick real well.

Remember Thursday to listen to us on Garage71.com at 7pm EDT 4PM PDT on the Wheels Events Radio Hour.

To finish up the week, or start one, we will be hosting Horsepower Breakfast at Shorty Howell Park in Duluth Georgia. We have room for over 1,000 cars. Bring the young ones, the kids play area is right where we set up. Want to go for a jog or a bike ride why not! Into hoops bring your team this is a great facility and we will be there rain or shine.