Volume 1 number 16 April 1 2011    Welcome to our first Weekly Digest.
The purpose is to bring you more in depth news and articles about the world of Wheels Events. 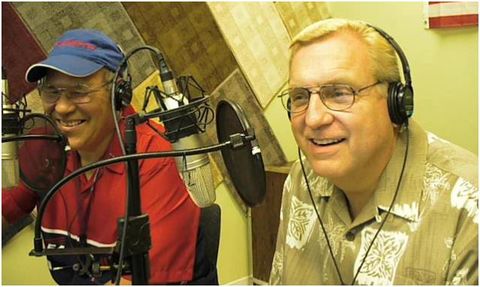 Last week was a busy week for the Wheels Events staff. We Started out Monday morning on the American Wheels Events Radio Hour. BIG NEWS We are Moving To Garage 71 Radio. Brian was kind enough to offer us the opportunity to reach a much broader and diverse audience. For those of you that listen live we will be starting at 7PM east coast time and 4PM on the west coast.

Steve Natale our West Coast contributor and Blogger for Examiner.com , Steve reported on the beginning of The Good-Guys Hot Rod Association Shows starting up their season.  Steve also started a new feature, California Car Spotting. Those of you that have never experienced California Car Culture will get a kick out of what the west coast uses as daily Drivers.

The International Auto Show made its stop in Atlanta last weekend. Opening the doors Wednesday at noon for the public, WE received a guided preview earlier in the morning while the displays were getting their finishing touches.

Atlanta has been just big enough to rate a stop on the International Show tour, just not big enough to get any new car Introductions or first time concept cars. That should be changing soon with Georgia becoming the center of the southern automobile manufacturing industry.  Porsche USA  has its headquarters in Atlanta , and Kia Motors USA is expanding its manufacturing plant just south of Atlanta.  BMW Manufacturing Co., Spartanburg South Carolina That is now the world wide manufacturer for certain models shows how serious the car Companies are getting about the south Nissan USA is headquartered in Franklin,Tennessee.

Walk around the show with me here. Ford Motor Company is on a roll! The only major us brand that did not have to take bail out money has made good use of the distraction the others were lost in, they have introduce many new models and update the whole fleet. EcoBoost is the operative word at Ford these days, smaller displacement direct injection engines with fast acting turbo chargers that improve fuel mileage and maintain high horsepower and torque while increasing fuel millage. In the F150 this translates into a 3.7 liter EcoBoost V6 that gets great millage and can out perform a Dodge 1500 Hemi, not only in millage put out pulls it when loaded down. Trucks are a huge part of the manufacturers business. See the Ecoboost in action here. 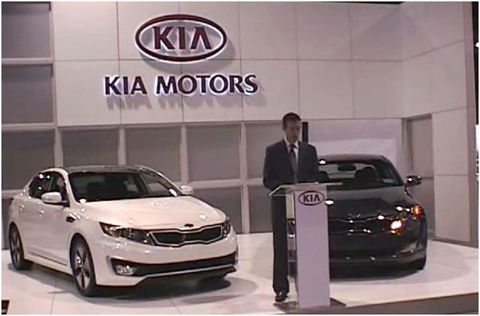 If there is any one company that is moving up fast Kia Motors is the rising star. Watch out Toyota, the South Korean make that reinvented itself by hiring former BMW executives and stylist has finally come up with a winning formula for its complete fleet. It made a very strong investment in the assembly plant in Georgia USA, that is
paying off by keeping vehicle prices down and creating jobs in an area that had lost much of its manufacturing base. The news conference was conducted by no less than Michael Sprague Vice President, Marketing & Communications of Kia Motors. It was a very strong statement on where KIA is heading. 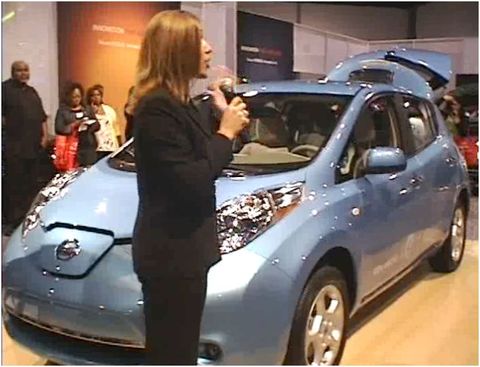 The Nissan Leaf in my opinion is the most significant new car introduction of 2010-2011. This is the first pure electric car, that is right, no auxiliary internal combustion engine. This car has a range of 100 miles with out recharging, that is enough for the commute of most people. It is also fast enough to keep getting run over on Georgia's Autobahn.The price of the car with the federal incentive is about $25,000. The cost of a full charge is under $3.00.

Watch the video here, it will answer most of your
questions. 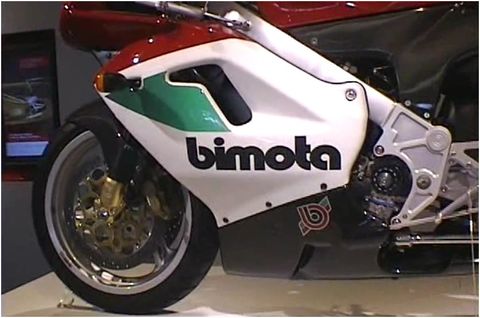 A few of us are bi vehicle, that is we have a passion for more than one type of transportation. If you are in the Atlanta area until June 13 you must go to MODA , Museum Of Design, Atlanta.The show is titled, Pasione Italiana. There is a reason that the Italians are the planets style experts, there is not much “off the shelf” stuff on their clothing or their Motorcycles. If you look closely you will see that every part not only does its job but is a work of art individualy. The thought of how everything interacts with each other and the final aesthetic feeling that it evokes is pure genius.
Enjoy my Video. And JP Brady's Photos.

My daily drivers are 55 chev and 48 F1 Ford truck. Lets keep them alive and on the road.  Terry