Drag racing season 2011 is off and smoking. Roger Sellers 1957 Bel-Air , 7/8 scale fiberglass body, 706cid. piloted here by Tom Neubert. Originally owned by Jim Bryant and driven by Rob Vandergriff. The car was recognized as the "worlds fastest 57 Chevy". This Chevy runs in the 4.70 class and finds itself in the winner circle many times !

This week, the HUGE  3 day event "Battle Of The States" at Brainerd Dragstrip was not one to miss !!! Action from the very first burnout to the very last rippin' heads up run . Steve Jackson in the Orange/green flamed Fox body mule took home the big win in "Limited Street" stuffing his pockets with $17,000 plus !!! Saturdays qualifying runs came with two big crashes on the top end , Bobby Dodrill in his 1987 Chevy 4x4 Outlaw truck pushing over 3000 hp broke loose on the top end in the right lane and hit the guardrail hard enough to send parts flying into the air. Bobby came out okay , just sore and bruised up. Catch the rest of the story at Jason's blog and photos. For the best listing of events in the south east the calendar is here VW photo by JP Brady n the Atlanta area the first Sunday of every month a peculiar things happens very early in the morning. People that normally would stay in bed and snuggle, are out of their homes at 6 am or earlier to drive to the Caffeine and Octane Cruise In. This 5 year old happening was originally organized by a group of friends to drive business to a Panera Bread store. Last year it outgrew its original location when attendance started going over 700 cars. The new location at a Barnes and Noble book store has been so popular and well received that it has overflowed the 750 car lot twice in 4 months. This past Sunday it went completely over the top with my best estimate of over 1000 cars and 5000 spectators. All of this begins at 7 am to 11 am, by noon the whole place is empty. It is hard to describe the eclectic collection of cars at this event. There are so many rare and collectibles vehicles, one offs and prototypes, besides the more mundane gaggle of Lamborghini's, Porsche's, street rods, customs RV's; motorcycles and boats. And there's more! This weekend we saw a new Ducati unlike any other anyone has ever seen. It is the response to what are known as "Naked Bikes" with a little Cruiser thrown in. Greg Foster is another of our staff photographers. I am a lucky man as I have more than one great photographer helping us get images for all of you to enjoy. Greg represented Wheels Events at the Amelia Island Concours d'Elegance this year. He was busy shooting some great photos, see more of Greg's photos here. I am partial to Concours d'Elegance events myself, I spent a lot of time going to and preparing cars for these events, The Amelia Island Concours d'Elegance is an automotive charitable event held each year during the second weekend in March on the Amelia Island Golf Links at the Golf Club of Amelia Island at Summer Beach. Not being a golfer myself, it is the only time anyone will ever see me walking through the links with purpose. One cannot ask for a better backdrop than this. Along with Pebble Beach, California arguably they are the crown jewels of the Concours Circuit. 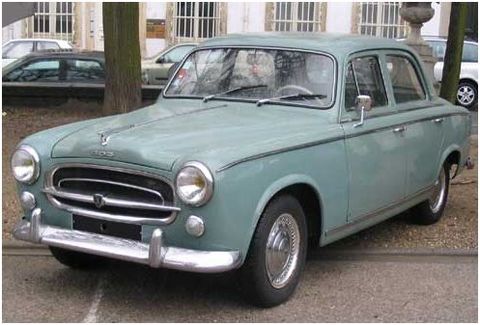 Tell us about your first.

Strangely enough I have not put on paper much about my first car. It was 1968, I was attending Plymouth High School in New Hampshire. I had my learners permit at 14 and could not wait until my 16th birthday to legally get on the road with out an adult. Your past rules your future and mine was thick with European car influences. Among those that influenced me was my apprenticeship teacher, Claude Meder who was an ex works driver for Peugeot, Renault and Dyna Panhard, also my fathers rally tested Peugeot 404 made me want one of my own. I wanted a car that was up to the challenge of the back roads of rural New England, a young man's dreams of the Monte Carlo Rally or the East Africa Safari Rally. I was destined to race with the best, so I needed a world class car to cut my teeth on. Besides my father's 404 a few VW's there were not many foreign cars in central New Hampshire, except for this grey Peugeot 403 that I would see in town every so often. One day I approached the driver of the car and asked him if he was interested in selling it. The answer was yes, as anything he drove was for sale, he was the owner of the local junk yard in Plymouth. The car was a 1959. It ran and shifted well, the sun roof worked and it had all the things a proper New England car has, rust holes here and there but for the most part it was in good shape. The 4 on the tree confounded my friends and the American hot rodder in me wanted to convert it to a floor shift. The French must have had a very serious problem with hub cap theft as all of our French cars had caps that bolted on to the center. $125.00 dollars exchanged hands and I now owned the Junk Mans Car. First thing I did was to take it home and clean it. After I washed it I started to polish the paint with compound. The grey chalky color came off on the polishing cloth and below was a light green color with some great shine.  All the bright trim on the Peugeot's was stainless steel and after I polished all the trim and bumpers it was another car altogether. The summer of this car was full of adventures and happy times that are still fresh in my mind, "give or take a lie or two".