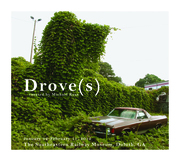 The Southeastern Railway Museum is pleased to present Drove(s), an art exhibition that takes a look at the culture of automobiles, our dependence on them, and their environmental impact.

The culture of automobiles starts with America's early love affair with cars and the freedom that they promised. Frequent design changes and new technologies created a sense of disposability and a desire for the newest model. Demand throughout the 20th century helped drive the American economy but also led to an overabundance of automobiles and serious environmental impacts.

The automobile and the freedom it promised led to dramatic changes in American cities. Suburban sprawl now stretches for many miles around every urban center with the car being the only practical means of transport. Too often, public transportation is of little help in an environment designed and built with the automobile in mind, while the promise of freedom has given way to massive traffic jams and a daily drudgery of commuting along overcrowded highways.

Can this dependence on the automobile and fossil fuels be sustained? How do we change our environments to become friendlier to pedestrians and mass transit while maintaining the freedom of movement to which we have grown accustomed?

These are the issues and questions raised by this month's exhibition at the museum. Housed in a newly restored 1871 train depot that once sheltered passengers waiting for their train, the depot itself is as much a part of the exhibit as the art hanging on its walls.

RSVP for Drove(s)-An Art Exhibit About The Automobile -Duluth, GA to add comments!