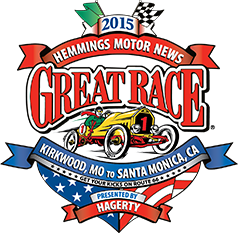 Jack and his beautiful granddaughter Zoe are at it again! Jack Hausmann has run the Great Race at least eight times (WOW) and is going again this with Zoe again as navigator (this is her third year!).  The Great Race is an antique, vintage, and collector car competitive controlled-speed endurance road rally on public highways. It is not a test of top speed. It is a test of a driver/navigator team’s ability to follow precise course instructions and the car’s (and team’s) ability to endure on a cross-country trip. The course instructions require the competing teams to drive at or below the posted speed limits at all times. The green flag waves at 10am on Saturday, June 20th in downtown Kirkwood, MO and goes for 8 days with the finish in Santa Monica, Ca.  The winner's purse is $50,000! Jack and Zoe will be posting photos and progress reports here, so please keep an eye out each day for updates.  Input from other participants and encouragement from friends and family is all welcome.  http://www.greatrace.com/ 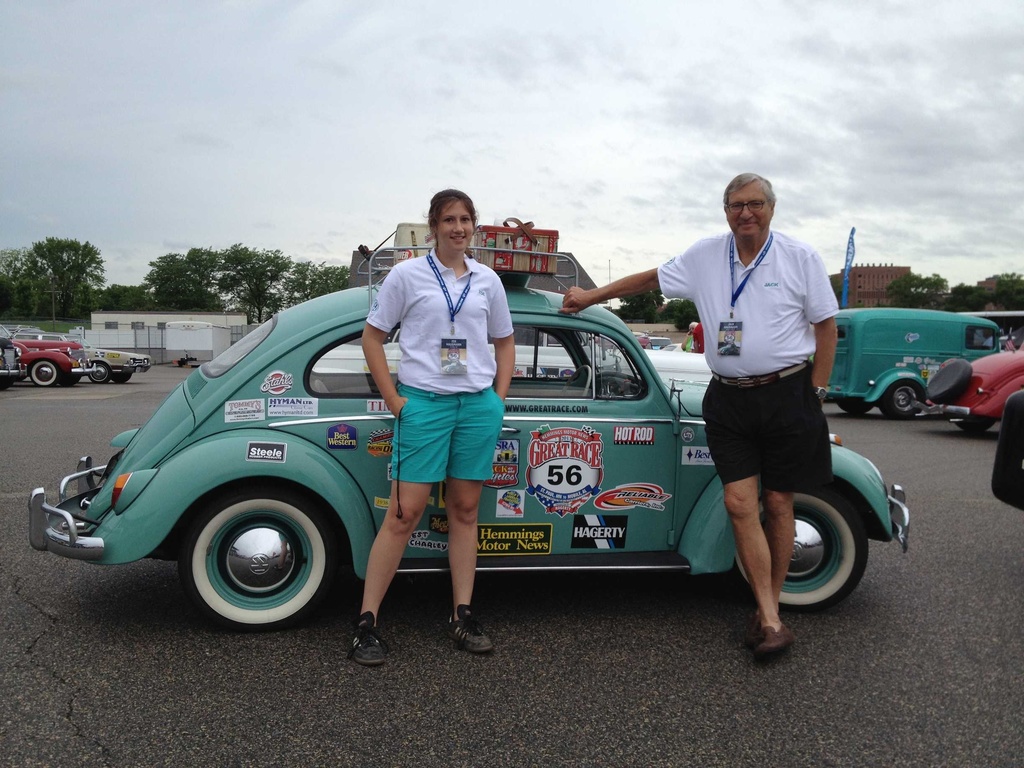 Comment by Zoë Hausmann on July 4, 2015 at 10:11pm
The race ended last week on Santa Monica pier. It was a hot, sunny day with barely a cloud in the sky. We ended up finishing 39th overall. We had an awards dinner at a resort in CA, and said our goodbyes. That's it for this year's Great Race.

Comment by Zoë Hausmann on June 27, 2015 at 1:13pm
On Thursday we went from Gallup, NM, to Flagstaff, AZ. It was an uneventful day. Yesterday morning was a long, boring drive. Jack says he fell asleep three times. We had a good lunch in Kingman, AZ. During the second half of the day we wound through the mountains of Arizona at low speeds. We stopped in the tiny town of Oatman, Arizona, where burros roamed wild looking for food. It was a nice break that made the day. Before the end of the day it was 117 degrees. Lake Havasu was beautiful. We went to a restaurant where Jack had the best rack of lamb he's ever had. Our scores were alright except for the last leg. Today we trek to San Bernardino.

Comment by Zoë Hausmann on June 25, 2015 at 11:23am
The past couple days have been hectic on the Great Race. On Tuesday we went from Amarillo to Santa Fe. It was anotger extremely boring day, but Santa Fe was the most beautiful city we've been to yet. The weather was perfect, and the city was lovely. Yesterday, from Santa Fe to Gallup, NM, things got interesting. We started the day by winding through a neighborhood development, with lots of loops and turns. Nearly everyone became thoroughly lost, whether they knew it or not-with the exception of a certain turquoise VW, thanks to some brilliant navigating, if I do say so myself. The lunch stop was in Albuquerque at Unser racing museum, where they had good food and beautiful cars. After lunch, we motored to the start, with a little trouble due to vapor locking, and began the second half of the day. We followed the instructions exactly, and to our knowledge we were doing quite well. When the first racecar passed us, we were confused. When the second car passed us, we were worried. When the third car came up behind us we were panicked. We decided to catch up with the car that was in front of us. We flew by the two cars that passed us at 75 mph on a country back road, slowing only when we thought we saw a cop car (we didn't see one). We were gaining on the car in front of us when we saw the dreaded green checkpoint sign ahead. Jack sped up, Zoë said slow down, long story short we got seven seconds late on that leg (Zoë's fault). We had done all right, but our speedometer was still wrong. We made a plan, and waited for the right time. When we came upon the first stop sign, I started the stopwatch, Jack held the speedometer still, I moved the needle back to zero, I said go, Jack drove, and our speedometer was working again. We were still baffled as to why it was wrong. After consulting a fellow racer, the mystery was solved. When we vapor locked after lunch, the car turned off while we were still rolling, which stopped the needle, and basically reset the zero point to 6.5 instead of 0. Considering the crazy course and the speedometer malfunction, we were okay with getting 53 seconds for the day. After 8:00, when the cars are allowed to leave the parc ferme, we went to dinner with Mr. Henderson, a friend of ours on the race. I went with him to use my navigating skills to guide him to the restaurant, and Jack went alone. Jack checked in at the hotel, then set off for the restaurant, where Mr. Henderson and I were waiting. That's where his troubles began. He got directions from a hotel clerk, and ended up driving seventeen miles out of his way and back again. He tried putting the address in his phone, and it took him to a place downtown with nothing there. Finally, a cop drove by, and he asked for directions. The next thing you know, he rolled up to Cracker Barrel with a police escort showing him the way. We ate dinner, went back to the hotel, and crashed. Yesterday was very exciting, and hopefully today will be too.

Comment by Zoë Hausmann on June 23, 2015 at 2:51pm
Yesterday we trekked from Oklahoma City to Amarillo, TX. It was a long, boring day spent almost in its entirety on a long flat road parallel to I-40. We felt pretty confident about our scores but were disappointed to find we messed up something in the last leg. We had burgers in Amarillo and turned in for the night.

Comment by Zoë Hausmann on June 21, 2015 at 8:50pm
Yesterday's scores proved as we thought; we got a 1min26sec for the day. This morning we left Springfield with sunny skies and a nice breeze. After a stop for oatmeal (Jack was craving Rotary oatmeal, but we were running late so we got McDonald's), we checked out speedometer-properly this time. We had a good but incredibly monotonous day. However, at the end of a too-quiet day, I was second guessing myself, and made a near-fatal mistake. After trespassing I had skipped an instruction, we raced to catch up with the car in front of its and get back in position. Thanks to intuition, wits, and a little bit of Hausmann luck, we got back in place and wound up with four seconds for that leg. Today we finished with a final score of 26 seconds for the day in Oklahoma City. Tomorrow we're off to Santa Fe.

Happy Fathers Day! You guys get a trophy and win the money!

This is one of the photos Tommy Lawson took at the start gate!

Comment by Zoë Hausmann on June 20, 2015 at 7:16pm
Yesterday's Hagerty Trophy Run was a good day for car 62. The icky weather yesterday may have starved off some of the competition, but we were eager to start the race right. We ended with good scores; we were only off 9.6 seconds for the day, earning an "ace," or a perfect score, on one leg. Today, Saturday, brought an end to rain with sunny skies and hot weather. This morning we were sent off by the lovely town of Kirkwood, MO, as the Great Race officially began. We had a decent morning, with skilled driving, clear navigation, and good teamwork. Unfortunately, due to a calculation/technical error with the speedometer, we were way off the whole day. We have since identified and resolved the problem, and should be back on track for tomorrow.

Comment by Zoë Hausmann on June 19, 2015 at 1:37pm
So far the pre-race preparations have been a whirlwind! We arrived in Missouri on Thursday morning to a dismal, overcast sky and a contestant drizzle. After a mixup involving a taxi driver taking us to the wrong hotel, we arrived safely in Kirkwood, MO, at the hotel locally known as the Viking. We had a wonderful hosted dinner at Grant's farm, where Ulysses S. Grant lived with his family. There were hundreds of species of animals from six of the seven continents, including ostriches, buffalo, and peacocks. Today we had a quick breakfast before heading off to Rally School to relearn how to race. We're looking forward to the competition and practice of the Hagerty Trophy Run this afternoon.
Jack says:
We had an exciting time going through the routine of the meeting and Rally School. There are 40 rookie teams and 10 teams from Japan. The weather has been rainy, but the rest of the week should be sunny. Jack also wanted to note that the money raised for Autism has exceeded $26.000. 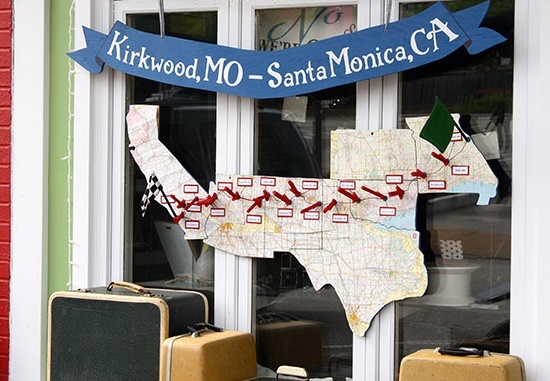 Cities from Missouri to California are getting ready for the 2015 Great Race, including Kirkwood, Missouri, the Route 66 city which will hold the start of the event June 20. Downtown Kirkwood stores, like the one pictured above which has decorated its windows with a Route 66 map and vintage luggage, are going all out to welcome Great Racers from around the world. Most racers will arrive by Wednesday, June 17, but some will start rolling into town as early as Sunday.
END_OF_DOCUMENT_TOKEN_TO_BE_REPLACED